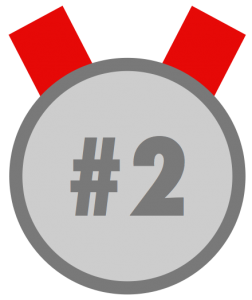 Why the Second, Second Best, Number 2, or the Defeated?

Often times, the point of view of the second-placer, defeated, or second to do something gets overshadowed by the tale told of the winner, the first, or the first to do. It’s not that I want to diminish anybody’s accomplishments, but rather I seek to elevate the accomplishments of those who’ve struggled but either came up short or were beaten. All too often, the stories of the second-placer are relegated to footnotes with very few exceptions, which brings to mind that saying that “history is written by the winners.” More often than not, ignoring the second-placer, the defeated, the second to cross a threshold leaves us with an incomplete story of the winner. My goal is to present some of stories and facts about those whose accomplishments were no less noteworthy or valid than those that came first.

A Little More about Vin

I consult on, design, and develop web and mobile applications for a living. There are a few more action verbs to throw in there, but for the most part that’s it. Many moons ago I was a writer and book editor, which I enjoyed doing very much, for a while at least. After a while, I got a little bored with that life and wanted to do something where I could tinker a bit more and use all these programming and computer skills I gained back in the day when trying to get my pirated games to work properly on my Apple IIGS. So I quit editorial publishing and started doing webby/programmy-type stuff, which had been more or less a hobby of mine until I realized that I could actually get paid to do it.

Although I fully enjoy my current work situation, I could never fully kick my writing habit. So I started SilverMedals.net as a way to tap into a part of my brain that had been dormant for about a decade.

Throughout this site I may refer to “we” and “us”. That’s not just legalese or me trying to seem like I have a staff of hundreds, but rather I do sometimes get help and advice with the project and I’d feel kinda bad talking about just me when in fact there is a significant bit of “we” involved. When I refer to SM, as in SilverMedals, that’s the viewpoint of the site as a whole. The same thing goes for when I speak of the site’s “editors”.

I try my utmost to use the best, most reliable sources possible for these entries. Primary sources are what I strive for but they can be hard to come by for someone who has a full-time job elsewhere. So please view this site as entertainment only because I am biased, I do have opinions on these topics, and I like to let that through sometimes, not because I enjoy being an overstated jerk, but for topics such as these I think it’s overall better to have an opinion out there and to have a point of view. If you want an illusion of non-biased writing, go to Wikipedia. In terms of validity of facts, however, I’ll gladly put my work up against anyone’s.

I will eventually post all my source material in case anybody wishes to fact-check these entries, or simply wishes to explore a topic more on their own. Most of the time those sources are linked to within the text, however, I do use a lot of print sources including actual books I get from an actual physical library. Unless stated otherwise, all text-based content and proprietary imagery on this site is the property of SilverMedals.net. This excludes public-domain photos and images, which I will attribute as necessary, and iframed content such as Google Maps or Youtube not produced by SilverMedals.net.

Advertisements from other companies, organizations, or entities will be shown on SilverMedals.net, and they will be distributed via Google Adsense. Money from those ads go toward the cost of maintaining SilverMedals.net (server and domain costs for the most part).

Editor’s note: Ad blockers take away revenue from the site. I cannot fault anyone for using an ad blocker, because I use one myself for most browsing, but if you could find it in your heart to whitelist this site, your support would be most appreciated.

Last thing about ads, it’s quite likely that they will try to monitor visitors’ activity—no more or less so than every other site out there. The type of data collected will be anonymous IP-level stuff, not anything directly identifying anyone. However, given the vast resources of the mother ship, it’s quite possible this data can be aggregated with other web data to create a fairly accurate portrayal of one’s online presence.

If you’re truly concerned about privacy at all cost, I suggest you view all websites via Tor or via secure VPN. For those interested, in a good easy-to-use VPN that costs very little, give a look to Private Internet Access.

SilverMedals.net will always be growing and evolving. Please feel free to hit me up with the contact form and share with me any suggestions you have for the site.