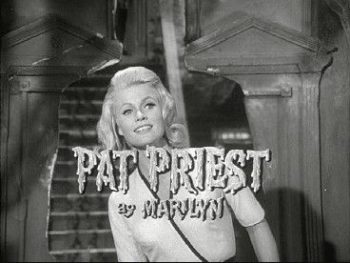 Pat Priest took over the role of Marilyn Munster on the television show The Munsters, which ran from 1964 to 1966.

The Munsters was a comedy show, which ran from 1964 to 1966, about a family whose members were based on horror novel monsters who were living a quiet suburban existence among “regular” people who viewed the Munster family as a strange bunch of freaks. It was a sort of “All-American” family sitcom meets late-night monster flicks. 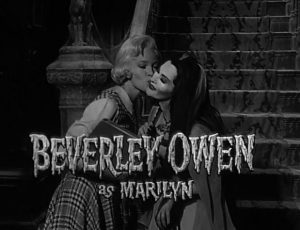 Beverly Owen, the original actor to play the role of Marilyn on The Munsters.

Fred Gwynn played Herman Munster — the goofy father of the family, who was based on and looked like the monster from the Mary Shelly novel Frankenstein; Yvonne de Carlo played his bride-of-Frankenstein, vampiric wife Lily; Al Lewis played Grandpa, the vampire father of Lily who lived with the family; Butch Patrick was the half-werewolf half-vampire son Eddie. The character of Marylin Munster, a niece living with them, was the “outcast” of the family — a beautiful, blonde, all-American teenager. (Despite the name “Marylin Munster”, the character was Lily’s niece not Herman’s, which leads one to speculate as to how the character came by that surname.)

Beverley Owen was originally cast as Marylin, but she left the series after 13 episodes. In fact, she quit acting altogether, and moved to New York (the show was shot in Los Angeles).

The role of Marylin needed to be a sort of blonde Marylin Monroe type for the show to work. So the producers immediately cast Priest, who bore a very strong resemblance to Owen.

Priest took over the role beginning with episode 14, “Grandpa Leaves Home”, which aired on December 24, 1964. She continued playing the role for the next 57 episodes until the show was cancelled in 1966.

Priest was later replaced by Debbie Watson for the 1968 film based on the series Munster, Go Home!.