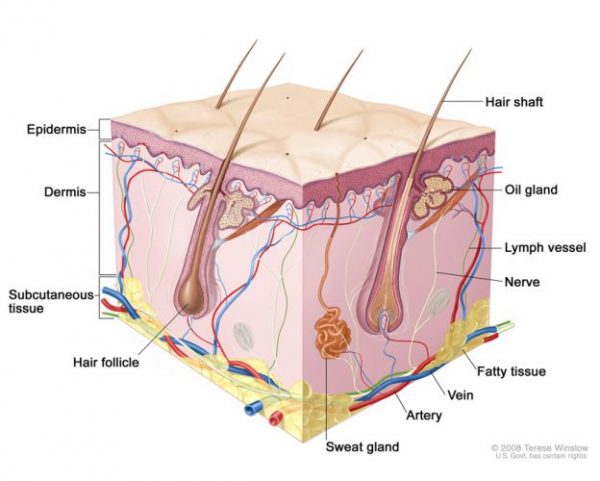 Editor’s note: Please don’t be a moron. Under no circumstances should anything written in this post be considered medical advice or be used for diagnostic purposes. Doctors do that stuff. I’m not a doctor and I don’t pretend to be. SilverMedals.net is not a refereed journal by any stretch.

Degrees are about depth

Second-degree burns are characterized by damage from said burn all the way through the uppermost layer of skin — the epidermis. This layer is also the body’s first line of protection in keeping things like microbes and dirt from getting into our bodies. It is also the part of our skin that is considered “dead skin” and flakes off in such forms as dandruff and dust. Second-degree burns also do damage to the dermis, which is the very sensitive skin layer below the epidermis where sweat, skin oils, and hairs are made. If you’ve ever scraped a knee and saw the raw pink shiny flesh in the area you scraped, this is the dermis.

These second-degree burns hurt a lot and for a while, sometimes weeks. Of course all burns — first-, second-, or third-degree — hurt like searing hell when they happen, second-degree burns stay hurt for several days while they heal, and new epidermis is formed. They also tend to look very raw, wet, and shiny. Then there are blisters, and these can get pretty big and water-balloony depending on how large an area you’ve burned. Sometimes these gross little sacks of fluid need to be drained, preferably by a physician or other qualified medical technician. (DON’T look at this video, it’s fucking nasty.)

Infection in second-degree (and third-degree) burns is always a danger, so it’s a good idea to keep the burn clean and to pretty much do what your doctor says if indeed you’ve done the smart thing and actually saw a doctor. These burns usually take a few weeks to heal, depending on the location of the burn. If you get one on a knuckle or other area that gets used and stretched a lot, you may be inhabiting that world of hurt for a bit longer. All this of course only applies to small burns, like if you burn part of your hand or other small area. Bigger second-degree burns, like ones all over your entire hand, your entire back, leg, or an equivalent area of skin are very serious and very much require an immediate visit to the hospital.

In assessing the severity of a burn in contemporary medicine, there are several factors medical personnel take into account. Aside from things like patient’s age and medical history along with the actual nature of the burn, the depth of the burn on the skin and the surface area are the main visible symptoms taken into immediate account. This is where we get into “degrees” of burns and percentages of the body, as in a “second-degree burn over 18% of the body”. This three-dimensional characterization and assessment describes factors that are linked to long-term recovery prospects and mortality. Although this relationship between the depth and size of burn and mortality have been mostly known to doctors and healers going back to the days when cave people were searing their cave-person hands while cooking mastodon burgers over open fires, it wasn’t until the late 1800s that these factors became fully understood in their relation to patient outcome and codified in a meaningful way.

Research was published in 1876 in the Lancet by William Smart, the Navy Inspector-General in the UK at the time, who observed the wounds of 12 burn victims who had sustained their injuries during a boiler explosion on their ship. It may seem rather intuitive to us today, but Smart observed that burn severity was determined by the size of the burn, that is the amount of surface area affected, the depth of the burn, and what other body systems were affected. For instance, a burn in a small area that reached the deepest layers of skin in a small confined area could be considered as severe as a burn twice over twice as large an area that didn’t burn as deep. If your airway, eyes, or other specific organs and systems were singed, that just added a whole other level to the mortality factor and severity.

These ideas were expanded upon in 1884 by a doctor named Schjerning who saw a direct relation between the surface area of the body burned and whether or not the patient would die. He figured: if 2/3 of the body was burned, the patient was going to die; if 50% of the patient’s body was burned, death was likely; 1/3 of the body, then generally the person would die but not always. The chief reason for death in any burn situation is bacterial infection in the burned area, but even that was just beginning to be understood in those days.

The idea of body percentages in determining severity and treatment options was refined further by several researchers working along several lines of discovery eventually leading us to what is today known as the “rule of nines” — a sort of quick way of determining the percentage of the body infected. Given the fact that certain parts of the body — such as the leg, arm, and back — generally take up the same relative proportion of surface area in most people, it’s easy to determine how much of the body was burned. Take a look at this page here, which has a diagram of this stuff; if for example you received second-degree burns on both of your arms (say for some reason you reached into a vat of really hot water all the way up to your armpits either because of an accident or a sudden flare up of idiocy), your condition could be described as having “second-degree burns over 18% of your body”, which would be a pretty fucking serious burn and would necessitate an immediate trip to the emergency room.

Getting back to degrees of burn, as in depth of burn, there is a separate history. Guilhelmus Fabricus Hildanus is one of history’s giants in terms of medical advancement. Around 1634, he set down what may have been the first system of describing burn depth. Hildanus described three stages of burn, the worst being the third stage where the burn was so deep where the patient couldn’t feel pain in that area because the nerve endings were singed beyond function or repair, and where the skin would feel dry and cracked, with the real kicker being no blistering because there was really nothing left to blister. His second stage was characterized by erythema (the superficial reddening of skin caused by damage to the capillaries), blistering, and the oozing of yellow fluid over the affected area. The most mild being his first stage which he characterized by erythema and blistering with colorless fluid.

This stage codification was later in the 1700s separated into four stages, and began being described as “degrees” of burn. Since four degrees wasn’t enough for some doctors and other burn-curious medical men, a doctor named Guillaume Dupuytre in the 1830s came up with a six-degree system, which he based on his observations while caring for 50 burn patients. This system apparently is still used by some doctors today, but most prefer the three degree system that was set down by a surgeon named Boyer who came out with his degrees of burn back in 1818. Sometimes doctors will modify that three degree system to include a fourth degree, but mostly you find doctors talking in three degrees.

In general the three degrees can be broken down as such:

One thing to know is that sometimes doctors or medical articles describe a fourth-degree category of burn. This is reserved for those charring ones that you see in horror or war movies that seem to go beyond the typical third-degree scenario.

So aside from it being “second”, why do we care about second-degree burns enough so to make a post about them. For one thing, these are burns hurt like hell at the spots where they reach such depths, whereas third-degree burns, at their deepest levels, may not hurt because the damaged nerves. It’s weird to think that you’d rather there be pain in a burn area than no pain, but that appears to be the case here. These are also burns that people sometimes don’t see a doctor about, which is bad because they can pretty easily become infected. For this reason, it’s really a good idea to have a doctor examine your blisters especially large ones before attempting any home surgery.

In terms of treatment, and this is a biggie, second-degree burns usually don’t require skin grafts, that is, where doctors take healthy skin from one place on the body and put it over the burned area. That’s a huge difference between the stages. Second degree burns straddle that thin line where really bad becomes flat-out alarming. That’s why the minute you feel like you’ve been physically burned, it’s super important to get that area under some cold water to prevent further injury.

So if your burn is red, blistering, and hurts a lot, it may be some relief to you — while you’re spewing profanity and begging for pain relievers while being driven to the hospital — that at least you have most of a working dermis in-place. That’s a good thing.

For a great read take a look at “History of Burns: The Past, Present and the Future“, which appeared in the October 14, 2014 issue of the medical journal Burns & Trauma. You’ll need a dictionary nearby for some of the more technical terms, but it’s a fascinating read for the curious.