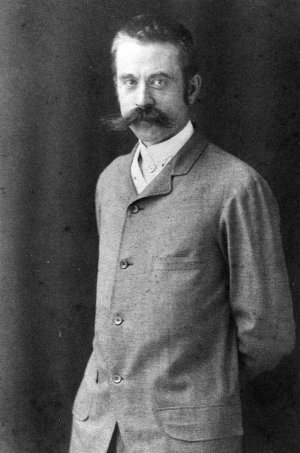 This is one of those “only-people-interested-in-SilverMedals-type-stuff” entries. While researching two upcoming pieces for SilverMedals (“Thomas Jefferson’s Second Dome” and “The Second Madison Square Garden”), the famous architect Stanford White came to figure prominently in both, which was not something that I had anticipated.

You may know Stanford White from such buildings as the Arch in Washington Square Park, The Bowery Savings Bank, the Gould Memorial Library, Rosecliff, and the old Pennsylvania Station. You may also know White as the Gilded Age/Fin de siècle serial womanizer who pretty much banged any young female dancer he could get his bushy mustache on. This tendency caught up to him when he was brutally murdered by a jealous husband in 1905. For our purposes was also the designer behind the second incarnation of Madison Square Garden which went up in 1890. 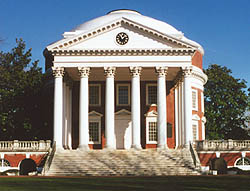 The Rotunda at the University of Virginia as it stands today. It’s very much worth a visit if you ever find yourself in Charlottesville, VA. (Photo by Shannon Bell and the National Park Service)

As for Thomas Jefferson, for those who aren’t acquainted with his resumé, he wrote the Declaration of Independence, served as the third President of the United States, was an accomplished architect, and was by all accounts one of America’s greatest minds. Unlike White, his kink wasn’t to bang young dance girls — Jefferson was a little more reserved. He kept his cavorting to one particular young slave he owned named Sally Hemings, with whom he had a rather long and fruitful affair.

You’d think the only things White and Jefferson had in common were that they were both Americans, were both architects, and that both shared a taste for socially unacceptable sex affairs, but then you’d be thinking wrong. There was one thing, a building actually, that both men had in common.

One of Jefferson’s most beloved personal projects was the establishment of the University of Virginia (UVA), for which he designed the Rotunda building as part of the Academical Village that forms the heart of the university (this was Jefferson’s second dome, the first being his magnificent Monticello, which is about a 10- to 15-minute drive from UVA). Built between 1822 and 1826, the Rotunda had a domed roof and served as the University’s library until 1897 when it was nearly destroyed by fire. The entire interior was charred and destroyed and the dome collapsed in. Fortunately, the rest of the exterior was left mostly intact.

So when it came time to rebuild the interior and dome of Jefferson’s Rotunda, who did UVA call in? None other than Stanford White — before he got shot in the face and killed of course.

Not exactly a coincidence, but not exactly nothing either. Whatever the case, it’s two of America’s most prominent architects joined in SilverMedals.net lore.