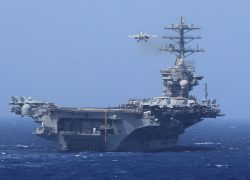 The U.S.S. Nimitz (CVN-68) was the world’s second nuclear-powered aircraft carrier. Built in Newport News, VA, the craft was launched on May 13, 1972.

The Nimitz and others in its class were designed to have a service life of at least 50 years. It is currently part of the U.S. active fleet.