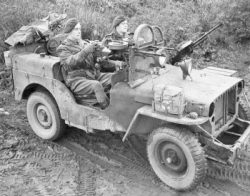 The Special Air Service, or SAS, is the United Kingdom’s premiere military anti-terrorist special force. The second regiment of the SAS was formed in 1943 and was listed as 2SAS. Its first commanding officer was William “Bill” Stirling, who was the younger brother of David Stirling, the man who first conceived of, formed, and led the SAS.

For more about the early history of the SAS and 2SAS, have a look at the SilverMedals.net feature article 2SAS — The Second Regiment of the UK Special Air Service.