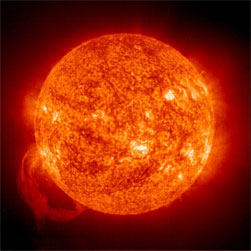 Helium is almost like magic with the things it can do—it keeps blimps and balloons aloft, makes our voices sound funny1 when we huff it, and it makes all sorts of industrial processes possible. Helium is just plain fun. And for its place among the silver medalists, helium is the second-most abundant element in the universe and the number 2 element on the periodic table.

Helium (atomic symbol He) was the first element to be discovered on a celestial body other than Earth—in this case, when a scientist decided to stare at the sun. It was first detected in 1868 by French scientist/astronomer Pierre Janssen. He was in India observing the sun’s light during a total solar eclipse by using a prism to separate the sun’s light and create a spectrum. He then measured the spectrum’s colors2 to get an idea of the elements that comprise the sun. For those of you who are not experts in spectroscopy, the main thing to know here is that you can tell what elements are in something by looking at its light spectrum. Elements affect the light (or to be more precise, radiation) in different ways. So if you know how a specific element affects light in a spectrum, you could compare that to the spectrum to figure out the elements present. In Janssen’s case, he noticed a thin yellow line, which didn’t exactly correspond to other known elements at the time. Not exactly sure what he was seeing, Janssen more or less dismissed the finding and figured that it was likely caused by the presence of the element sodium. Same year a few months later, a British scientist named Joseph Lockyer3 noticed a similar yellow line while observing a sun spectrum. Instead of dismissing it, Lockyer figured he’d found a new element. To further convince himself and others of his theory, Lockyer shared his information with a chemist named Edward Frankland, who himself agreed with the findings. Together the two scientists named the new element “helium”, after the Greek sun-god Helios4.

Sir William Ramsay in his lab. Don’t you wish all scientists could be this dapper?

For another decade and a half, scientists could only detect helium by observing the sun, which was kind of a drag since they couldn’t get the stuff into a lab to run tests with it. Helium wasn’t known to exist on Earth at all. That changed in 1882 when Italian scientist Luigi Palmieri got the now familiar spectrum result when he examined the spectrum of the lava flowing out of an erupting Mt. Vesuvius. The helium in the molten rock was escaping and floating up into the atmosphere, which Palmieri was able to detect. This was great news for chemists.

Things got even better in 1889 when Scottish chemist Sir William Ramsay detected helium in a spectrum reading in his lab. Ramsay was doing an experiment where he dropped some uranium-rich rock into sulphuric acid to measure the gasses given off from the reaction. Funny thing here was that he wasn’t even looking for helium but found it mixed in with the known gases he was looking to detect.

Collectively, these terrestrial observations were pretty huge for scientists because they were finally able to reliably extract helium on Earth for experimentation. Finally, it was Swedish chemists Per Teodor Cleve and Nils Abraham Langer who were able to isolate helium gas, measure it, and give helium its atomic weight.

Helium is tremendously light, as in not heavy. It weighs far less than regular air. Because of this, its most obvious use is as a “lifting gas”. Not just for little party balloons, helium in larger quantities can lift some very big things such as the scientific equipment on weather balloons, and of course blimps. Interestingly enough helium is not the lightest gas out there. Hydrogen, which has a molecular weight about half that of helium5, is the lightest and is a more effective lifting gas. Back in the early days of zeppelins and airships, it was the preferred lifting gas because it was easy to produce, cheap, and effective. Unlike helium, however, hydrogen is a very reactive element that can explode with very little provocation as can be seen here and more dramatically here. Helium on the other hand is actually a fire retardant and doesn’t readily burst into flames. So if you were to take a blowtorch to a helium balloon (or in the case of a helium airship, hit it with a bolt of lightning), the balloon material may burn a bit, but the gas would not.

This also illustrates one of helium’s greatest properties: it is not reactive but inert. It’s one of the periodic table’s “noble gases“, which is a group of elements known for being mostly unreactive. Most other elements do not exist on Earth in their pure forms but will react with others. For examples: hydrogen and oxygen will form water when kept in proximity; iron will rust when it comes into contact with oxygen; lithium will explode when it comes into contact with water. Helium won’t do any of that. So for certain industrial processes and chemical reactions where you don’t want any atmospheric “impurities” getting into your stuff, helium is useful as a safe micro atmosphere. This comes in handy for making semiconductors, fiber optics, and the process of arc welding where inert atmospheres are essential. Without helium, we wouldn’t have iPhones, computers, or many other contemporary electronics and components. At the very least, we would have them but they would be more expensive.

Weather balloon filled with helium. Tied below it are scientific instruments used to measure all sorts of things.

Helium generally exists as a gas because it has such a ridiculously low boiling temperature—around -269°C (-452.2°F). To remind you of how cold that is, absolute zero, the lowest temperature you can go (well, almost) is -273.15°C (-459.67°F); so considering its boiling point is only a few degrees higher than absolute zero, liquid helium is pretty darn cold. This in itself makes helium tremendously useful as a refrigerant, especially when dealing with superconductors.

Superconductors are elements or compounds that have zero electrical resistance, which means they don’t lose electricity while conducting it, unlike regular conductors, such as power lines, that operate at at regular atmospheric temperatures. In short, you lose some electric current to the stuff it’s going through, but if you cooled certain materials to near absolute zero and ran a current through them, you wouldn’t lose any electricity. Magnetic resonance imaging machines (MRI) are types of machines that need helium to cool their superconducting magnets in order to operate. The same is true for the Large Hadron Collider in Switzerland, the biggest particle accelerator in the world. Helium is used to cool the superconducting magnets that shoot atoms down the 17-mile-long circular tube at ludicrous speeds.

In terms of size helium is really small. Of course all atoms are minuscule, but even as atoms go, helium itself is pretty tiny. This tininess makes helium a great gas to use when testing for leaks because it will pass through tiny holes that other larger elements will not. As weird as it may seem, there are some leaks where helium can get through that regular air cannot because the molecules that make up our air are too big. So when engineers need an inert gas to test for the tiniest of leaks on spacecraft, industrial machinery, or engines, they turn to helium.

The Large Hadron Collider, the biggest particle accelerator in the world, uses helium to cool the electromagnets that propel particles at each other at enormous speeds. (Photo by CERN.)

Scuba divers use a combination of oxygen and helium when diving. We cannot breathe pure oxygen alone because it’s actually pretty toxic on its own, and at low depths where the pressure is high, among other gruesome and unsettling things that go on, it can be difficult to breathe air as it exists on the surface. In addition, gases in our air, particularly nitrogen and oxygen, at certain levels can become narcotic and deadly. The actual medical and physical reasons behind this phenomenon are a bit beyond the scope of this article, but a couple of fine explanations of their effects can be found here for nitrogen narcosis and here for oxygen toxicity. For our purposes, just know that at high pressures, the gases in our body can get pretty messed up. So in commercial and deep sea diving tanks, helium is often mixed in as a light and inert gas to first off keep the ratios of oxygen and nitrogen at manageable levels, and to actually make it easier to breathe.

To round things off, here are some other uses for helium: computer hard disk manufacturing; as a heat-transfer medium in some gas-cooled nuclear power plants; in those little helium-neon gas lasers we see at check-out counters in stores that scan the bar codes on whatever stuff we’re buying.

Running out of Helium?

As with most things that we need for our continued comfort and advancement, all is not well in the world of helium. We Earthlings may have a helium crisis on our hands in the somewhat near future. Helium doesn’t grow on trees. In fact, despite its great abundance in the universe, there is very little of it on our planet. Most of our helium comes from deep under the ground where it is produced from the radioactive decay of heavy elements, uranium being one of them. It is usually extracted where natural underground oil and gas deposits are tapped. As stated earlier, helium is very very very light. So when it escapes its container, be it from the ground, an airship, or some guy leaving a helium tank valve open, the helium rises up and eventually goes out into space never to come back. That makes it a non-renewable resource in the most extreme way.

The United States is the world’s biggest producer of helium, which is found in unusually large deposits in U.S. oil and gas resources. Since 1920, the U.S. has been stockpiling helium in underground holding tanks, most of which are found in Texas. Tired of simply holding onto the stuff and wishing to make some money off the reserve, the U.S. government, for better or worse, has been selling off its valuable helium reserve since 1996, which is why helium today is still pretty cheap despite the fact that it’s pretty rare. The problem with this is that the U.S. is due to run through its reserve by 2018, which could pose some serious problems for industries that need the stuff. Luckily science has come to the rescue for the time being.

To the relief of helium hoarders and enthusiasts everywhere, researchers from Oxford University in 2016 detected a large helium deposit under the Rift Valley in Tanzania using a new technique that is believed will lead to similar discoveries. This is good news for those industries that rely on cheap helium. It is such a dramatic finding that it has been described as a real “game changer” in the world of helium resource management. If true, it is quite possible that helium balloons will adorn children’s parties for at least another generation.