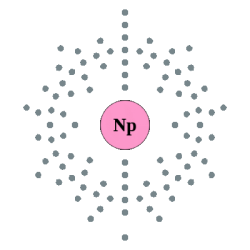 Neptunium was officially discovered in 1940 by Edwin McMillan and Philip Abelson at UC Berkeley in Berkeley, CA. They created the element by using a cyclotron to shoot up a piece of uranium with neutrons. The uranium then began emitting beta-rays, which indicated the presence of a new element. Earlier claims to the discovery of neptunium lacked the proper documentation and proof, therefore McMillan and Abelson were credited and given the honor of naming the new element. They chose “neptunium” because the planet Neptune was the planet in our solar system located beyond Uranus; in the periodic table, neptunium is the element one beyond uranium, so the name seemed to fit.

The first element ever to be artificially created was technetium (43), which was created in 1937.

Helium is almost like magic with the things it can do—it keeps blimps and balloons aloft, makes our voices sound funny1 when we huff it, and it makes all sorts of industrial processes possible. Helium is just plain fun. And for its place among the silver medalists, helium is the second-most abundant element in the universe and the number 2…read more