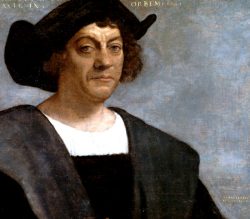 Christopher Columbus’ second voyage to the Americas began on September 24, 1493, when he led his fleet of 17 ships bearing about 1,700 men from Cadiz, Spain. It was on this voyage where the colonization of the “New World” began in earnest, with Columbus established the settlement known as Isabella on the north coast of the island of Hispaniola. It was also on this trip that the American Indian slave trade began when Columbus, not wanting to return without something of value to present to his sponsors, kidnapped several natives and brought them back to Spain.