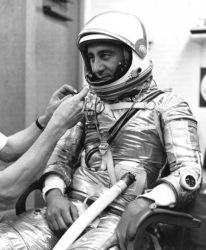 Gus Grissom became the second U.S. astronaut to reach space on July 21, 1961, when he piloted his Mercury craft, called the Liberty Bell 7, in a suborbital flight that lasted 15 minutes, 37 seconds.

Astronaut Alan Shepard became the first U.S. astronaut to reach space on May 5, 1961. Shepard was also the second person in the world to ever reach space.