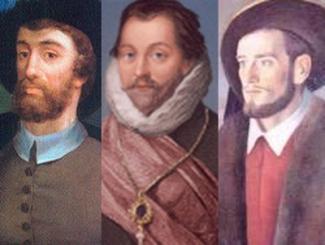 You’d think that if finding out the first person to do something was relatively easy, then finding the second person to do something would be just as easy, right? SilverMedals finds that this is not the case in many cases, and annoyingly so. For instance who was the second person to circumnavigate the globe? Most of us American kids learned in school that the first person to lead a round-the-world expedition, or circumnavigation, was the Portuguese explorer Ferdinand Magellan, or rather Fernão de Magalhães1 as it should be written in the proper Portuguese. The next thing we find out was that he never actually made it back to Spain from where he began his voyage, but rather he died in the Philippines. No matter, one of his top men Juan Sebastien Elcano led the remaining journey back, the whole ordeal of which took a little over three years. So we can be reasonably sure that Elcano was first, right? Well not exactly. Things start to get confusing and technical pretty quickly and we need to start setting down some rules.

What defines a circumnavigation? Is it a complete trip around the world beginning and ending in the same port? Is it crossing a meridian, a place which can be at any point along the longitudinal of the port from which the sailors left? Does the person need to end up in the exact place from where he or she began? Do we need to know who the first member of the crew was who actually stepped off the boat and onto land? If that’s the case, then who was second? Is there a time limit on these things?

It seems that in order to properly get into this subject, we need to set some ground rules. So SilverMedals has decided to use a modified “Phileas Fogg”2 set rules for determining whether or not a circumnavigation occurred. They are:

Going by those rules, we can safely say that it was indeed the Spanish-Basque Elcano and his crew who made the first circumnavigation. Some scholars point out that Magellan had a slave named Enrique who it could be argued made the first circumnavigation. Enrique was a slave whom Magellan had taken during a previous voyage to the Spice Islands, and who accompanied Magellan on his fateful try at a circumnavigation. After Magellan’s death in the Philippines, Enrique escaped3 and it is not known whether or not he ever made it to his home in Malacca, which would have completed his circumnavigation. Since we have no evidence as to whether or not he made it back to his homeland, we can’t give Enrique the number one spot, which would have put Elcano at number two.

For determining the second circumnavigation, we come to the story of the Spanish Basque friar and navigator Andrés de Urdaneta who in 1526 served on a Spanish expedition to the Spice Islands. The expedition, which set sail from A Coruña, Spain, was led by Garcia Jofre de Loaísa and, interestingly enough, Juan Sebastien Elcano (who you’d think would have been done with sailing after his nearly disastrous voyage with Magellan). Unfortunately the journey proved unsuccessful as both captains died and only 24 men, including Urdaneta, actually made it to the Spice Islands. There, Urdaneta was taken prisoner by Portuguese authorities, and spent several years tooling around the Spice Islands. Finally, he was taken to Lisbon in 1536, as a prisoner, where he managed to escape and return to Spain.

Urdaneta was an important figure in Spanish maritime history, and is credited on later voyages with finding the best route from west to east across the Pacific Ocean, which came to be the main route followed by future Manilla Galleons. However, we cannot consider him the “second” circumnavigator because he never actually returned to the port from where he began. Urdaneta did indeed go around the world, as a prisoner for half of it, but he does not specifically satisfy the “Phileas Fogg” rules. This leaves us with Drake.

Sir Francis Drake did indeed, beyond a shadow of a doubt, lead the second circumnavigation of the world. Charged by Queen Elizabeth I to raid Spanish shipping on the Pacific coast of the Americas, Drake and his fleet set out from Plymouth, England, in 1577, and returned to the same port three years later in 1580. A feature article on Drake and his voyage will be presented on SilverMedals.net in the coming months. In the meantime, if you’re looking for a good read on the subject, The First Circumnavigators: Unsung Heroes of the Age of Discovery4 is a well-written overview of the subject. It pretty concise but with enough interesting little tidbits to give color to these otherwise forgotten explorers.

The image above depicts from left to right Juan Sebastián Elcano, Sir Francis Drake, Andres de Urdaneta.
1. Apologies to those of Portuguese descent, but I’m going to stick with the Anglicized “Magellan” partly because it’s not exactly second nature for me to hit those accent marks while typing.
2. Phileas Fogg was Jules Verne’s protagonist in his lovely work Around the World in Eighty Days, which is about an English gentleman who, along with his trusty if not bumbling French valet Passepartout, set out to circumnavigate the globe for a wager. His goal was to return to the exact spot where he made the wager, the Reform Club in London in 80 days or fewer.
3. In Magellan’s will, he actually freed Enrique and left him money on which to live, however, the remaining crew did ignored the will.
4. SilverMedals.net receives no compensation for recommendations made on this site. It’s just a recommendation for a good read if you’re into the subject.