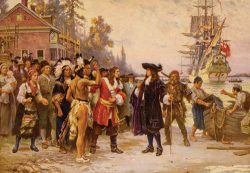 The second state to enter the Union, determined by the order in which states ratified the U.S. Constitution, was Pennsylvania, which entered the union on December 12, 1787.