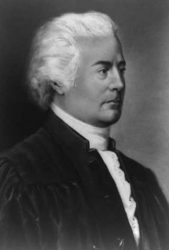 Former Supreme Court Associate Justice John Rutledge became the second Chief Justice of the U.S. Supreme Court on August 12, 1795, when he took the oath of office. The first Chief Justice John Jay had resigned his post in June after having been elected governor of New York. A recess appointment by President George Washington, since congress was not in session at the time, the U.S. Senate would have had to confirm Rutledge for him to keep the post, but it didn’t sit in session again until December of that year.

Unfortunately for Rutledge, he gave a highly politically charged speech a couple weeks after he was nominated railing against the recently ratified Jay Treaty with England. The treaty, which was negotiated by the administration of President George Washington, the guy who nominated him, was a controversial topic in the early days of the Republic. He also insulted the President in his speech, which was not a good idea considering it was the President’s party who would have to confirm his nomination in the Senate.

Over the next few months, Rutledge sat on the court and heard two cases, but his political position deteriorated rapidly. By the time it came for him to be confirmed by the Senate, there was almost no support for him. On December 15, 1795, the Senate voted to reject his confirmation by a vote of 14-10.

Unfortunately for Rutledge, he had a couple “firsts” associated with his brief Chief Justice tenure. He was the first Supreme Court nomination to have been rejected by the Senate. He was the first recess appointed justice to not have been confirmed by the Senate. And lastly, he to this day holds the record for the shortest tenure as Chief Justice.