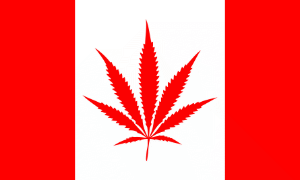 The legal sale of recreational marijuana began today (10/17/18) in Canada, the second country to do so. More than just decriminalizing its use, or limiting its use or sale to specific places, people can now buy, cultivate, and use marijuana to their heart’s content (if their hearts are content with whatever limits their provinces may impose, that is). None of this “doctor’s prescription” or “cops looking the other way” bullshit, we’re talking full-on smoke-em-if-you-got-em legalization, and that’s a good thing.

Canadian legalization is a boon to those who are not only fans of the little green plant, but also the businesses that hope to capitalize on the demand. Those small-business head shops, bodegas, and smoke shops will definitely benefit financially, but more so will large corporations and banks who stand to profit immensely from this new revenue stream. In addition, there will possibly be a flood of money for medical research into the plant, which could benefit both pharmaceutical stock holders and patients.

For people who work in the Canadian agriculture industry, they may have been handed the biggest cash crop since tobacco. For a while now in Canada, farmers and potential farmers have been learning cultivation techniques in the hopes that this legislation would pass, giving them a quick entry into the production and lucrative trade.

On the other hand, there will be some issues both long- and short-term as a result of legalization. There will be legal battles between the provinces and federal government as interpretation of the law gets worked through. There will be issues of where people can consume the plant (the sale of “No smoking” signs will probably jump a bit), and a likely increase in the impaired use of cars and other large vehicles. Over time, however, things aren’t likely to change too dramatically. You’re not going to see droves of bloodshot-eyed U-Toronto dropouts taking drags from their Church-filled blunts on the pot-smogged sidewalks of Cabbage Town. More like you’ll be on a sidewalk in SomeCity, Canada and get and unwelcome whiff of some AK-47 as the smoke passes by, or maybe there will be some tense moments in public or private gatherings where some inconsiderate oaf starts puffing out clouds of smoke in places where kids are playing (that already happens with tobacco). Also, marijuana legalization won’t solve all the problems that proponents claim it will. There will not be a huge drop in crime, people won’t be somehow happier, and it won’t magically lead to the cure of every disease known to humanity.

Economically, there will be a flood pot hitting the market, which will likely lead to a fall in prices — great for the consumer, but not so great for farmers who may have dedicated too much acreage to the crop and may not see a return on their investment. There will likely be more than a few pissed off investors if that day should come.

No matter what, the positives will outweigh the negatives economically and socially. At the very least, the Canadian government is going to see a nice boost in its tax revenues as its citizens spark up.

The first country to legalize recreational marijuana was Uruguay in 2014 (after an act passed in 2013), but their legalization was not done quite in the same way Canada is doing it. Citizens are allowed to grow marijuana plants but in order to do so legally, they need to register with the Uruguayan government, which keeps a database of growers. For the paranoid, this is a bit of a problem. Also, the government didn’t do a great job in setting up its dispensaries and distribution, a problem which may have led to an increase in drug-related crimes after passage of the law. More time is needed to fully assess the benefits and/or damages caused by marijuana legalization in that country.

For Canada, they seem to be doing it the right way and will not be as overly cautious as the Uruguayan government. In the long-run, what with the economic and likely health benefits, marijuana legalization in Canada will be a good thing.