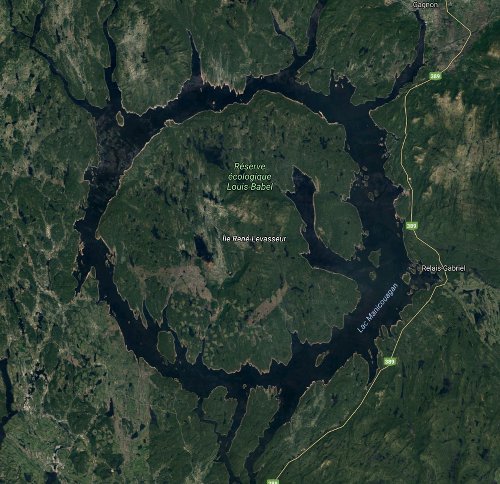 You’d think it would be easy to establish which is the world’s second-biggest lake island — a lake island being an island on a lake. For the most part, you can look at a map, figure out which bodies of water are the lakes, then look for the islands in them. Simple right? For the biggest lake island, it’s super simple. The biggest lake island in the world is Manitoulin Island on Lake Huron and is part of the Canadian province of Ontario. It measures about 1,068 sq mi (2,766 sq km.), and actually has several smaller lakes within it, and those lakes also have small islands. Without any question, Manitoulin Island is entirely surrounded by water on a gigantic Great Lake whose lake-ness is quite unimpeachable. When we try to get to the second-biggest lake island, things are no longer simple.

Had we investigated this topic in 1999, we’d have had a clear-cut winner in Vozrozhdeniya, otherwise known as Rebirth Island, on the Aral Sea. It was a pretty good-sized and isolated island — about 900 sq mi (2,800 sq km) — and was the place where the Soviet Union established a lab and factory to develop chemical and biological weapons during the cold war. The sea itself was once about the size of Ireland, and was one of the Soviet Union’s best freshwater fisheries. Then in the 1950s, the Soviets embarked on a series of agriculture projects that involved digging irrigation canals and diverting millions of gallons of water from rivers and into areas set aside for farming, cotton being the principal crop (“white gold” as the Soviets referred to it). The two major rivers that used to fill the Aral Sea, but whose water was almost entirely diverted, are the Amu Darya and the Syr Darya. Today, barely 10% of the water that used to flow through these rivers actually makes it to the Aral Sea — a body of water, it should be noted, that is in the middle of a desert, which means it’s arid and hot, which means it evaporates pretty darn quickly, which means that the lake has dried up and has almost completely disappeared. The result was that in 2001 Vozrozhdeniya lost its status as an island, and instead became a peninsula.

Vozrozhdeniya, or “Rebirth Island” used to exist on Lake Baikal. Looking at the picture above, you can sorta make out where the island used to be. Kantubek, the town shown in the upper middle of the photo is now a ghost town on what was once an island. Odd to think that the Aral Sea disappeared so more people could wear jeans and cheap T-shirts.

By 2008, Vozrozhdeniya wasn’t even a peninsula anymore because the water had evaporated further to a point where the former island/peninsula became a land bridge. Nowadays, it doesn’t even have a name because Vozrozhdeniya has become what amounts to a rocky hill surrounded by a salty sandy desert to the north, south, and east, and a pathetic remnant of the sea to the west. Sadly, this former icon of SilverMedals will likely never return. (Take a look here for a slightly over-the-top but interesting documentary about the island, along with this good one about the remnants of the Aral Sea itself, which is considered one of the world’s worst environmental disasters.)

Next we come to René-Levasseur Island (pictured above), and here’s where the complications begin. The island is located on the Manicouagan Reservoir in the province of Quebec, Canada. What’s odd about this island is that it takes up more area than the lake it is surrounded by, almost like a moat. The reason for the ring shape is that the island actually sits in a crater that was created when a meteor slammed into the area millions of years ago. Today, the island known as the “Eye of Quebec” because from space it looks kind of like an eye (duh!). But here’s the problem: the lake that rings René-Levasseur is somewhat artificial. I write somewhat because there were originally two large crescent-shaped lakes on either side of the future island before it was an island. Then in 1970 after construction of the Daniel-Johnson dam on the Manicouagan River, which emptied one of the lakes, the waters rose, and caused the two lakes to connect thus creating the Manicouagan Reservoir.

The newly created island was named after the chief engineer who built the dam, René Levasseur and today is home to a huge nature preserve. If we were to allow for artificial islands, then indeed René-Levasseur Island would be the second-biggest. (Incidentally, it is also the largest artificial island in the world.) The argument against calling René-Levasseur Island the second-biggest lake island is that it is not natural, but SilverMedals is of the opinion that if Rebirth Island can lose its status because of human action, why not allow for the changing of status for the same reason? So to SilverMedals, René-Levasseur is the second-largest lake island.

We’re not done here. Since SilverMedals can never leave well enough alone, we need to go on to find out what the second-biggest “naturally occurring” lake island is. Now things really get even more complicated. Many lists out there include Soisalo Island in Finland as the next biggest lake island, but this is a little dicey.

Technically, Soisalo is surrounded by water, but they’re not really “big” bodies of water. Four lakes — Kallavesi, Kermajärvi, Suvasvesi, and Unnukka — are found around the “island”, but they are connected by little waterways that look and act more like rivers. In addition, the lakes are at different elevations! Here is where SilverMedals takes exception. Despite the fact that Soisalo is technically surrounded by water, it seems more a land mass that happens to have water around it rather than a single body of water with an island in it. It is almost more like a river island, which is a topic for another entry. So, sorry Finland. You guys have a great country, but in the case of lake islands, SilverMedals isn’t buying into the bullshit — Soisalo is not an island.

Finally we come to a true naturally occurring lake island in Olkhon Island, which is located on Russia’s picturesque Lake Baikal, which itself is found in Eastern Siberia. Measuring about 280 sq mi (730 sq km), this is one that really isn’t up to debate in terms of its status as an island. Thankfully for us, this is where all complications end. So if SilverMedals were to ever do a story on the “world’s second-biggest naturally occurring lake island”, then Olkhon it would be.