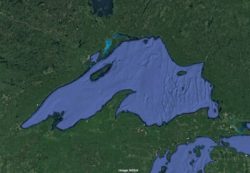 One of the Great Lakes of North America (the others being Lake Erie, Lake Huron, Lake Michigan, and Lake Ontario), it was originally formed by glacial action at the end of the last ice age between 10,000 and 11,000 years ago. The actual shaping of the lake took place gradually over the past 2.5 million years.

What is considered the biggest lake in the world by area is the Caspian Sea. Despite its name, it is considered a salt-water “oceanic” lake since it is landlocked, has no outflows, and is fed by rivers. It covers an area of 143,244 sq mi (371,000 sq km).