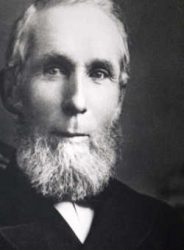 Alexander Mackenzie (1822-1892) served as the second Prime Minister of Canada from November 7, 1873, to October 8, 1878. Born in Scotland, Mackenzie immigrated to Canada in 1842 and settled in Kingston, Ontario. He went on to represent a district in Ontario in the Canadian Parliament as member of the Liberal Party.

Mackenzie was preceded and succeeded by Sir John A. MacDonald, who served as the first and third Prime Ministers of Canada.