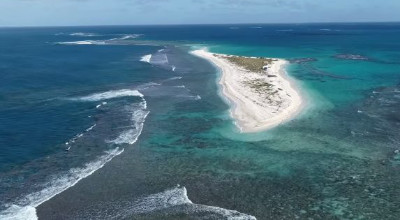 Almost all of what was the second-biggest island in the French Frigate Shoals disappeared on or around October 4 after having been hit by Hurricane Walaka. The category 4 storm’s high winds sent a storm surge over the small islet almost completely destroying it. The now-gone 11-acre island was known as East Island and was part of the Northwestern Hawaiian Islands National Monument. The disappearance was first reported by Honolulu Civil Beat, and later confirmed by the U.S. Fish & Wildlife Agency.

The French Frigate Shoals is a small atoll in the Hawaiian Islands about 560 mi (902 km) west of Honolulu, about 2/5 the way between the Hawaiian capital and Midway Island. Prior to the storm hitting the island, seven researchers were evacuated from the island on October 4. They were studying monk seals and green sea turtles.

Although East Island was only the second-biggest island in the atoll, and a tiny island as far as islands go, it was an important turtle bird and marine sanctuary. About 16% of population of endangered Hawaiian monk seals live in the shoals, and of those, 30% raised their pups on East Island making. There are only about 1,400 monk seals in existence. All nesting females had left by the time Walaka hit, so the storm likely had little if any impact on the adult population. But NOAA scientists estimate that 19 percent of this year’s nests on East Island had not yet hatched and were swept away by the storm. 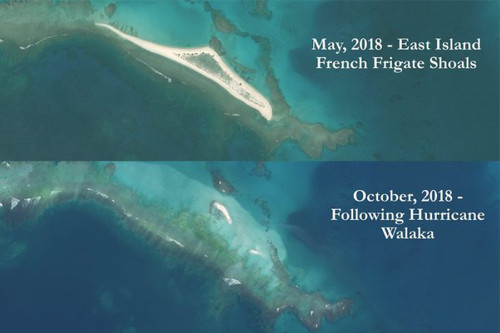 East Island before the storm and after.

The island was also an important breeding area for green sea turtles. Although National Oceanographic and Atmospheric Association (NOAA) scientists believe that likely all nesting females had already left East Island, their eggs, which are laid in the sand were threatened. They estimate that 19 percent of this year’s nests on the island had not yet hatched and were swept away by the storm. As for the conditions under the waves, scientists will have to wait until next year to assess the damage to the coral below.

Although it cannot be stated for sure that this specific storm was the direct result of climate change, the type of storm it was and the frequency by which similar storms have been occurring across the globe seem to fit in with a climate change model.

As it stands now, the biggest island in the French Frigate Shoals is Tern Island. It takes up an area of about 26 acres, has an old airstrip that was built during WWII, and is uninhabited except for a few thousand birds.