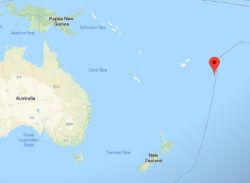 The Tonga Trench in the Pacific Ocean has what is considered the second deepest point in all the world’s oceans. Located about 75 mi (120.7 km) to the east of Tonga in the South Pacific Ocean, the trench itself is about 50 mi wide (80.4 km) and runs north and south for about 850 mi (1,368 km).

The deepest point in the world’s oceans lies in the Marianas Trench in the Western Pacific Ocean. Known as Challenger Deep, that point is about 36,070 ft (10,994 m) below sea level.