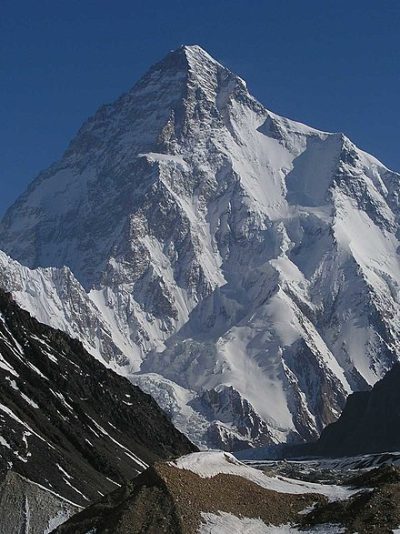 K2 has always been considered one of the most dangerous mountains over 8,000 meters to climb. I covered most of this here in “The History of K2 — The World’s Second-Highest Mountain“. But as mountain climbing equipment improves, routes get more secured, and more highly trained guides become available, this danger may be subsiding somewhat. At least as much as the current numbers for K2 suggest.

During the 2022 climbing season, Pakistan recorded a record-breaking number of permits and climbers hitting its peaks. One Pakistani minister claimed he approved more than 1,900 visa applications and issued over 550 permits to international climbers for the five 8,000-metre mountains in Pakistan. K2 alone accounted for at least 207 of those..

There are a several reasons for this spike. First there’s the price. It’s actually cheaper to climb K2 than, say, Mt. Everest — permits run from about $7,200 for a group of 7 for K2 (which also covers 4 other nearby peaks) as opposed to $11,000 per person for Everest. There are also more outfitters and guides ready to help rich people to the summit. These commercial outfitters provide all the tools necessary for the dabbling and bored rich person to ascend with little training. Sure they have to be fit, but they don’t have to be accomplished mountain climbers. That’s what the guides are for! Finally, there’s the Covid effect. Pakistan had restricted its foreign climbing permits during 2020 and 2021, so all those who wished to tackle the “Savage Mountain” had to wait until the viral coast was clearish.

A few things you need to know about high-altitude mountain climbing. For those who don’t regularly climb the world’s highest peaks, the death zone is an area at around 8,000m in elevation (about 26,000 ft) where the air is thin, dry, and cold. The human body starts doing weird things at this height and slows dramatically. In many instances, even experienced climbers tell stories of how walking 50 ft in this zone can feel more like 50 miles with every muscle aching, tired, and wanting to stop. Indeed, with the low oxygen, one feels the strong desire to fall asleep, which in such conditions is likely to be fatal. In general, it’s not a good idea to spend more than 20 hours in this zone even with supplemental oxygen tanks (which wouldn’t last you anywhere near 20 hours anyway). But due to the bigger numbers of climbers hitting K2’s slopes in 2022, climbers spent longer-than-recommended periods of time in this zone.

Aside from this death zone, there’s the terrain which is usually extremely steep and covered in ice, which in many cases K2 included has the annoying tendency to break off killing those below or on it. K2 especially has a feature known as the “serac” off of which large chunks of ice will break off with absolutely no notice.

The biggest factor in summiting a mountain is the weather, and weather is the reason why traffic jams occur on mountains. At altitude, the weather is extremely variable. You have jet streams whipping over mountains knocking loose rock, ice, and even ropes that climbers have affixed to help them on their ascents and descents.

Will K2 Become the Next Everest?

So what does that mean for K2 as a destination? 2022 was a record-breaking year for Although it’s likely we won’t see images such as this which occurred on Mt. Everest in 2019, in 2022 there was indeed a bit of a backup in the mountain’s “death zone” which could have cost lives had it been almost any other year. Luckily the weather was uncommonly accommodating.

As long as there is a degree of political stability in Pakistan, a local population that desires all that foreign tourist-climbers money, and prospective climbers with deep pockets, we will probably see K2 attempts slowly rise over the next few decades. And with that, more fatalities.