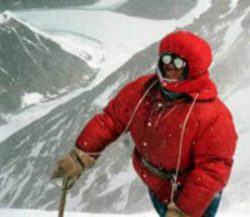 A Tibetan Chinese woman named Phanthog was the second woman ever to climb to the summit of Mount Everest. She was deputy-leader of the 1975 Chinese expedition, which approached the mountain via Tibet. Phanthog made it to the summit on May 27, 1975, after several others in her 18-party team turned back due to complications with altitude sickness and frostbite.

While at the top of Everest, Phanthog recorded data on her physiology as part of an experiment, which she radioed back to her support team.

Phanthog goes by the name of Pan Duo in Chinese news sources.

The first woman to reach the summit of Mount Everest beat Phanthog by 11 days. Junko Tabei and her Nepalese sherpa Ang Tsering reached the summit on May 16, 1975. They were part of a climbing team from Japan that approached the summit via a route similar to Sir Edmund Hillary and Tensing Norgay when they made their historic ascent. Their try almost ended in disaster when her team’s camp was covered by an avalanche 12 days earlier.