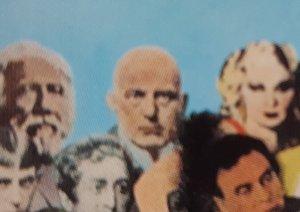 Sgt. Pepper’s Lonely Hearts Club Band was first released in the U.K. on May 26, 1967, and in the U.S. on June 2 of that year, exactly 50 years before this Second Thoughts entry. Widely regarded as the greatest album of all time, it is also one of the most widely recognized album covers. It features the four band members in their colorful uniforms standing in front of an “audience” of hand-picked guests composed of cardboard cutouts of celebrities from the past and then present. In a group that features among many others Mae West, Edgar Allan Poe, Sonny Liston, Oscar Wild, Lewis Carrol, Marlene Dietrich, and Shirley Temple (a full list of audience members can be found here), there in the back row second person from the left is none other than former K2 explorer and weirdo extraordinaire, Aleister Crowley.

The Beatles’ 1967 album <em>Sgt. Pepper’s Lonely Hearts Club Band</em>. Crowley is the intense-looking bald guy in the back row, second person from the left.

For those who haven’t read the SilverMedals article on K2: The Second-Highest Mountain, Crowley was part of the 1902 expedition led by Oscar Eckenstein that attempted a summit of the deadly mountain. During that ill-fated expedition, Crowley spent much of his time in his tent sick with malaria, and at one point was so out-of-his-skull delirious that he started waving his gun at people and voices who weren’t there. In fact, before he ever became known for the things he is so well-known for, Crowley was an avid amateur mountaineer at a time when the sport was young. It was not for this reason, however, that the Beatles included him in their audience. For the most part, Crowley’s mountaineering was the most sedate and “normal” thing about him even though it was mainly eccentrics who made up the greater mountaineering community at the time.

Crowley was an occultist, a poet, a novelist, a social critic, a big proponent of recreational drug use, and a philosopher. He challenged many of the societal norms in his day that he saw as hypocritical and stupid. Having been born into a rich and very devout Plymouth Bretheren family, Crowley spent the rest of his life basically railing against Christianity, and was quick to point out its flaws and fallacies in his lectures and writings. Using a combination of beliefs and philosophies from various western religions, paganism, and Egyptian mythology, along with a healthy dose of hedonism and “sexual magick”, Crowley formed his own religion, which he called Thelema. In the name of this religion in 1920 he established the “Abbey of Thelema” at a villa he was renting in Cefalù, Italy (Sicily).

Pictured here is a very naked and very hairy Aleister Crowley in 1902 during that year’s K2 expedition. Crowley wasn’t one for half measures, preferring to go all-in on whatever he was doing. During the expedition, Crowley decided to go into full-on mountain mode and refused to wash or cut his hair or beard.

For the next three years, many devoted followers visited and stayed at the Abbey, listening to his sermons and participating in its rituals. Most of these rituals involved sex and drugs, some involved weird animal sacrifices and possible self harm. Crowley himself developed a worrisome heroin and cocaine habit, and apparently made good use of local prostitutes. When word got out about the goings on at the Abbey, Crowley was assailed in the British press, which led the then leader of Italy Benito Mussolini to deport him.

Called “the Wickedest Man in the World” because of his activities at the Abbey, Crowley was a difficult figure to pin down. He was generally amusing in public and had an overpowering charisma and presence that made most friendly contemporaries able to withstand or even indulge in his nutty belief in magic and his pseudo-religious posturing. On the other hand, he was misogynistic, racist, and showed a degree of anti-Semitism.

Depending on whom you ask, Crowley was either an eccentric and amusing genius, or a batshit crazy, self-centered, drug addict. At the very least, he was a fascinating figure who went against what most of society demanded, which is why he is considered one of the most influential personalities in British history, and why the Beatles (likely John Lennon’s idea) included him in their all-star audience for Sgt. Pepper’s Lonely Hearts Club Band.