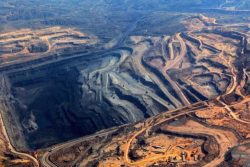 Haerwusu Coal Mine is the world’s second-biggest coal mine. The biggest open-pit coal mine in China, it covers an area of 29 sq mi (67 sq km), and is believed to have a total coal reserve of 1.73 billion tons. Located in the Inner Mongolia Autonomous Region, Haerwusu began production in 2008. It is expected that the mine will provide a steady output of coal until about 2080.

The North Antelope Rochelle coal mine in the Powder River Basin of Wyoming, is currently the world’s biggest coal mine by reserve.