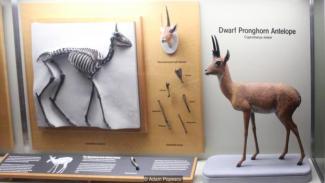 It looks like we can add “survivor of mass extinction” to the list of awesomeness associated with pronghorns. According to this piece on the BBC website, while mastodons, giant sloths, and camels were dying off like a bunch of evolutionary wimps 11,000 years ago, the pronghorn kept bounding along the American plains and deserts like a happy-go-lucky little smart-ass. That part is interesting, but what’s even more interesting and for that matter puzzling, is the fate of the dwarf pronghorn.

The dwarf pronghorn was similar to the pronghorn we know today except that it grew to only about 2 feet in height and weighed about 20 lbs. Usually, it seems that the bigger version of animals tend to die out, while the smaller quickly reproducing ones stick around. In the case of the pronghorn, it ended up being the other way around.

One particularly interesting reason for this evolutionary outlier is that the atmosphere back when the dwarf pronghorn died out was far more oxygen rich, meaning there was less carbon dioxide for plants to photosynthesize properly, which means that there were fewer trees around. Trees are big and need lots of carbon dioxide. Fewer trees meant less cover for smaller the smaller pronghorn, which meant that it couldn’t hide from predators. The Dwarf pronghorn was likely not as fast as its larger cousin because it was so small. Since fewer trees meant more grasslands and fewer places to hide, dwarf pronghorns were easy prey for predators, whereas the bigger pronghorns as we know them today thrived in the ecosystem that better suited its predator-avoiding adaptations.

Of course this is only a theory, it’s a pretty compelling one.