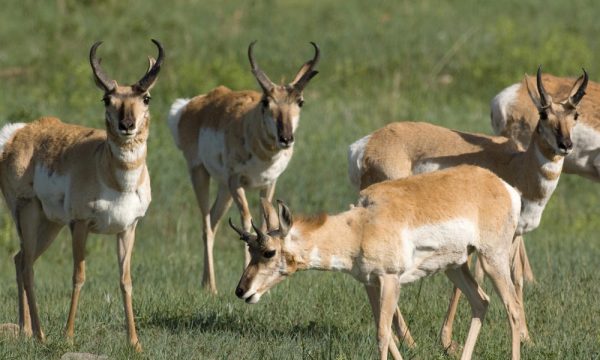 Cheetahs are cool. They’re sleek. They’re majestic. They’re hunters who use their speed to chase down their prey. They’re the fastest land animals around, topping out in some measures at 60-70 mph. True, cheetahs can only maintain their sprints for maybe a half mile to a mile at most before needing a rest, but we don’t care. Cheetahs are just so damn magnificent.

Then there’s the pronghorn (antilocapra americana). It is not as fast as the cheetah, but it is the second-fastest land animal in the world. To the lay person, a pronghorn looks like any other hoofed antelope-type creature — brownish, white, kinda boring. A fine animal, yes, but for the most part, it looks like a goat with aspirations. Despite having been clocked at 50-60 mph in full sprint — just a tad slower than the cheetah — the pronghorn is not nearly as cool. It’s not sleek. It is very much NOT magnificent. It’s always running away from predators. People don’t want to run away. People want to be the cheetah, the one who IS the predator. Nobody wants to be the pronghorn.

Some Love for the Pronghorn

Often times the pronghorn is referred to as “pronghorn antelope”, but it is decidedly not an antelope. It’s not even related to the antelope; those are found in Africa, Europe, and Asia. The pronghorn, which is only found in North America, is the only living member of the Antilocapridae family, all the rest of which went extinct.

On land, the cheetah is the fastest animal, right?  Over what? A sprint? A marathon? If it’s a sprint, then the cheetah wins. On the other hand, if the course is longer, the pronghorn would be victor.

This isn’t about who would win a race. Since scientists can’t really line a cheetah and a pronghorn up in a starting gate, fire a pistol, and have them run, a race is out of the question. So when discussing the fastest land animals, we’re going by the highest speed an animal can reach, whether it’s only for a few seconds or a few hours, over one mile or twenty, we are looking at the pedal-to-the-metal topmost speed.

As for scope, we’re talking about land animals running (thus leaving out sailfish and peregrine falcons). If the pedant or contrarian in you is still not satisfied with these terms, here’s an article in Fast Company where you may get your fix for exception and qualification.

The speed measurements will vary from source to source, so in this article we’re dealing with ranges and estimates.

Not a big animal—an adult pronghorn stands about 3-3.5 feet from hoof to shoulder, and weighs anywhere from 90 to 130 lbs. The best way to describe their overall appearance is that pronghorns look pretty deer-like—generally brown and tan, with white bellies and fluffy white-haired butts1. Male pronghorns have lines of black on their faces and snouts, with some black patches on their necks.

Like cows, pronghorns have horns, not antlers, but unlike every other horned animals, they shed the outer sheath of their horns each year. Male pronghorns have larger horns that branch or split into two branches just above the horn’s base. The longer portion of the horn can grow to be about 12 inches long and curve inward and back, while the shorter portion of the branch in the front sticks up straight (the horn shape is what puts the “prong” in pronghorn). Females have shorter straight horns. 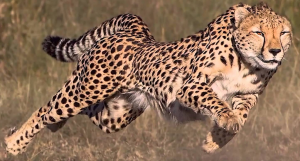 The cheetah is the animal kingdom’s land-speed champ, but only for short sprints. A pronghorn would leave a cheetah in the dust over distances more than a couple miles. Photo courtesy of Pravda.ru.)

Pronghorns can live to about 10 years, slightly longer in captivity. In the wild, they mainly live in bands or herds that can number up to 1,000 in the western grassy flatlands — prairies, arid plains, desert scrublands—wherever they can get a steady diet of delicious grasses, shrubs, or cacti.

Even though everything about the pronghorn is about getting away from other animals, they are curious creatures and will sometimes approach humans just to get a closer look. Since they can bolt away at a second’s notice, pronghorns can often afford to take such risks, except of course when it’s hunters with guns that they’re examining. At those times their curiosity works against them. 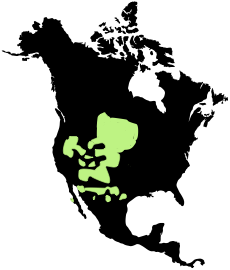 The approximate range (in green) of the pronghorn. Very very very approximate. (Image by SM.)

To live in their habitat, where there is little cover to hide in or places to take refuge from predators, animals like pronghorns have to be fast. So fast are they that very few predators can catch a healthy adult pronghorn, at least not without considerable effort, ingenuity, and luck. Not only are they fast, but pronghorns have good endurance and can keep up a 40 mph pace for several miles. Even wolves, who can run for whole days without stopping would have trouble catching them. Other predators like bobcats, mountain lions, or coyotes need to rely on stealth and trickery to nab a pronghorn, even a young one. But pronghorns, aside from being blessed with speed, also have superb eyesight. They can spot predators as far as four miles away, which is more than enough space and provides enough lead time for the pronghorn to skedaddle. Even their hair is designed to come off easily in clumps so that if a predator does happen to get a bite on a pronghorn, all it will get is a mouthful of pronghorn hair.

With the pronghorn’s insane speed, endurance, and other adaptations, it may seem to be an evolutionary overkill. So if North American predators aren’t generally equipped to catch healthy adult pronghorns, why did pronghorns evolve to be so freakin’ fast? The possible answer to that died out about 10,000 or so years ago.

That’s the “why” part about pronghorns being so speedy, now for the “how”—how can pronghorns achieve those speeds?

At first glance, it would seem that pronghorns have no business being as fast as they are. Their legs seem smallish and fragile, and unlike cheetahs, pronghorn bodies do not seem particularly strong or aerodynamic. Pronghorns do not have any single particular physiological advantage over other similar animals. It’s really several things that go into it.

Pictured here is a typical male pronghorn. Looking at it, you’d never think that it was a finely tuned speed machine. (Photo by the San Diego Zoo).

Pronghorns in general are very good at burning through large amounts of oxygen. On the cellular level, pronghorn blood contains more hemoglobin than most other animals. This allows the blood itself to carry more oxygen to the muscles than the “regular blood” of similarly sized animals, thus allowing the muscles to contract better and quicker.

According to scientists researching pronghorn physiology, the pronghorn when running at a paltry (for it at least) 22 mph consumes 5 times as much oxygen as a typical mammal of its size consumes. This is because pronghorns’ lungs take up more real estate in their bodies compared with similar animals, allowing for more air to enter. To get the oxygen to the leg muscles efficiently, pronghorns’ hearts are quite large for their size. The leg muscles, although they don’t look overly impressive, are quite a bit bigger and stronger than those in animals of similar size. Even their hooves are built for speed. They are cushioned to absorb the shock of hitting the ground as they pound away in full sprint, and they have glands in the feet that secrete oil to keep the hooves in good condition.

In all, pronghorns may not look like much, but they are amazing physical specimens. They have a combination of speed and endurance that few other animals possess. So if you ever happen to be on safari in Africa and see a cheetah sucking wind after its short sprint, know that the unloved pronghorn is somewhere in the American west still running at high speeds away from a frustrated predator.

For some added fun, here’s a nice little video about the pronghorn.