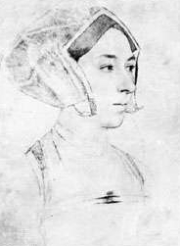 Anne Boleyn was the second of Henry VIII of England’s 6 wives. In order to marry Boleyn, Henry had to get an annulment of his marriage to his first wife, Catharine of Aragon. When the pope refused, Henry broke with the Catholic Church in Rome, which led to the English Reformation. Henry then married Boleyn in January (25) 1533, and had the Archbishop of Canterbury, Thomas Cramner, annul his marriage to Catharine.

The reason why Henry VIII divorced Catharine of Aragon was because she was getting on in years and had not borne him a male heir. This was a problem for Henry because he wanted a male heir to take the thrown when he died. The House of Tudor, to which Henry belonged, had a tenuous claim to the crown, so it was his wish to solidify his position with a strong male heir to take his place when he died.

In September 1533, Anne gave birth to a daughter who would eventually become Queen Elizabeth I, but still no male heir. Over the next three years, Anne had one miscarriage and delivered a stillborn son. All the while, she became very unpopular at court because of her somewhat arrogant behavior.

In 1536, in response to trumped up rumors of Anne engaging in adultery and incest (with her brother), Henry had Anne arrested and locked in the Tower of London. The evidence was circumstantial at best, however, she was found guilty of adultery after a trial and was sentence to death by beheading. She was executed May 19, 1536.