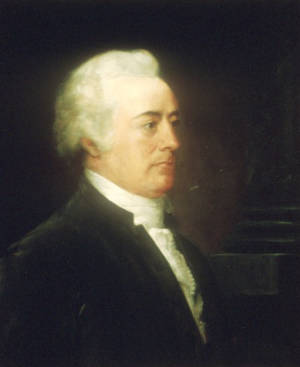 John Rutledge (1739-1800) of South Carolina was an intriguing political figure whose highly preventable downfall came swiftly. In the early days of the U.S., political rules and practices were still being hammered out while the lines between what was appropriate and what wasn’t were slowly being drawn. What didn’t always help matters was the press at the time. Rumors were often published with little fact or investigation to back them up in a similar way to the way rumors become stories on today’s social media. Political stories in the newspapers were sometimes even more scandalous and lurid than they are in today’s press (believe it or not). Charges of adultery, alcoholism, and madness were just a few of the charges thrown around about political figures in the press. Sometimes a politicians words, even though hearsay, would get published with little corroboration. Where there was some degree of corroboration the words could lead to outright violence — before Alexander Hamilton was the subject of a hit Broadway show, he was a conniving political opportunist who ended up getting killed in a duel with Aaron Burr, an equally conniving although less successful political opportunist who was angered that Hamilton did not refute words attributed to him in the press disparaging Burr. Even at times when there were good solid arguments against a politician’s views, the usual accusations of fathering illegitimate children were often salted onto the story to make the story more, well, tasty. Supreme Court nominees are no different, as is still evident today, and in Rutledge’s case there actually ended up being some truth to the rumors of his impaired mental state.

Rutledge was a former Supreme Court Associate Justice who became the second Chief Justice of the U.S. Supreme Court on August 12, 1795, when he took the oath of office. The first Chief Justice John Jay had resigned his post in June after having been elected governor of New York. A recess appointment by President George Washington (congress was not in session at the time), the U.S. Senate would have had to confirm Rutledge for him to keep the post, but it didn’t sit in session again until December of that year.

Rutledge had once been one of the inaugural associate justices of the U.S. Supreme Court but had left that post in 1791 to serve on the South Carolina Court of Common Pleas and Sessions after having served only one highly uneventful year. In fact, while serving as Associate Justice the U.S. Supreme Court, Rutledge never heard a single case during his time in office. He did however have a lot of political clout stemming from his days serving in the Continental Congress and as a delegate at the Constitutional Convention, but all that got blown away on July 16, 1795, a little over two weeks after Washington nominated him. On that day Rutledge gave a speech blasting the ratification of the highly controversial Jay Treaty. This was bad for several reasons.

The Jay Treaty* was a trade agreement negotiated between the Washington administration and the government of England. It was signed by Washington on November 19, 1794. The treaty was then ratified by a two-thirds Senate majority (a vote of 20 to 10 in favor) on June, 24, 1795, which put the treaty into effect. The main points of the treaty involved navigation and trade with England, which gave the two countries favored-trade status with one another. This was the position by the Federalists who were in power to have closer ties with England, whereas the anti-Federalists or Demoncratic-Republicans who were the minority party opposed the agreement on the grounds that they simply didn’t like England very much. In addition, many had seized former loyalist properties in the U.S. and they were worried that an agreement with the English would have compelled them to give back the land they took. The position of the anti-Federalists was that the U.S. should not give favored status to England but instead lean more toward the young country’s old ally France. Rutledge by giving his speech when he did, ended up picking a fight with the wrong people.

The fact that Rutledge gave a speech arguing against the policy of the guy who nominated him was bad enough, but in the speech Rutledge said that “he had rather the President die than sign that puerile instrument”. It’s never a good idea to suggest one’s preference that a President die rather than take a certain action, but it was particularly bad idea to voice such a thought when person who happened to be President at that time was none other than George Washington, who was probably the only national figure popular with both parties. Things ended up getting ugly from there.

Several Federalist-leaning newspapers began hinting that Rutledge was a drunk and possibly mad. They even pointed to his speech as evidence. These rumors for the most part were not true, but they were easy for the papers to write and difficult for Rutledge to disprove especially given his weakened political state. By the time it came for him to be confirmed by the Senate, there was almost no support for him anywhere in Washington’s cabinet or in the ruling Federalist party. On December 15, 1795, the Senate voted to reject his confirmation by a vote of 14-10.

The Senate rejection didn’t really do much for Rutledge’s mental state. Only 11 days after he was rejected, on December 26 he tried to commit suicide by jumping into Charleston harbor and drowning himself. He was rescued by two slaves.

Ruined, depressed, and powerless, Rutledge retired from public life following his rejection. He died at the age of 60 on June 21, 1800. Today one has to wonder if his political downfall could have been prevented had he not given that June speech. In addition one has to wonder if his confirmation would have passed had the Senate been in session and Rutledge not have been a recess appointment with months between his nomination and confirmation during which his standing in the press slowly diminished. It certainly explains why in the U.S. today, ruling parties try their darndest to get their nominees pushed through to confirmation as quickly as possible thus preventing any rumors from turning into fact, which they somewhat did in Rutledge’s case. On the other hand, it prevents further scrutiny of the nominee’s history, which also like Rutledge turns up things that may give even their nominating President some pause.

Unfortunately for Rutledge, he had a couple “firsts” associated with his brief Chief Justice tenure. He was the first Supreme Court nomination to have been rejected by the Senate. He was the first recess appointed justice to not have been confirmed by the Senate. And lastly, he to this day holds the record for the shortest tenure as Chief Justice.

* The treaty was named for John Jay who had been sent to Britain to negotiate the deal. At the time he was serving as the first Chief Justice of the U.S. Supreme Court, but had taken time from that role to negotiate the treaty. Unlike today, the Supreme Court back then did not have much of a case load, and it was considered kosher for a Federal judge play other roles in government.