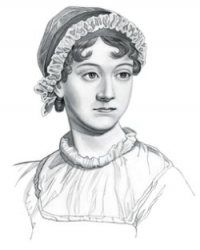 One of history’s greatest writers, Jane Austen’s six full published novels have not only been read and enjoyed by millions, but studied and made into several hit television series and movies. The second novel written by Jane Austen to ever be published was Pride & Prejudice, which came out in January 1813. At the time, the novel was published without her being named as author. Instead the credit read simply, “By the author of Sense and Sensibility“, that work having been her first published novel.

Sense and Sensibility was also published without her name, but instead was credited as having been written “By a Lady”.

Austen had begun work on the novel in 1796 at the age of 20. At that time, the working title of the novel was First Impressions. You can read all of Jane Austen’s novels here at the excellent and informative janeausten.org.