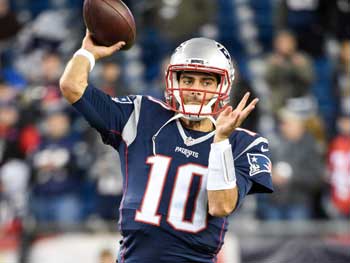 The quarterback-heavy New England Patriots the other day traded their backup (or second-string) quarterback to the quarterback-needy San Francisco 49ers for a pick in the second round of the 2018 NFL draft. Reasons for the trade are beyond the scope of this particular post, however, the trade of a valuable player who came into professional football as a second-round pick in the 2014 draft for a future second-round pick compelled SilverMedals.net to quickly examine “the second round” of the NFL draft a little more, not so much to see who was taken and such, there’s plenty of that elsewhere, but to instead consider the second round as it compares to the first.

In many ways, the second round of the NFL draft is far more interesting and compelling than any of the other rounds, partly because there are still many great players available who could come right in and help their teams from day 1, partly because of the discussions surrounding those players (reasons why they fell out of the first round) but mostly because those same players come at what can be considered bargain prices compared to first rounders. Then you start to get some creative economics and cost-benefit analyses going on. According to Spotrac, a neat little site that presents statistics tracks player contracts for numerous sports, after the first round, the average total value of contracts signed by players after the 2017 NFL Draft dropped by almost $10 million from $14.9 million to $5.1 million. If one were to draw a line graph of the average value of those contracts, the downward slope would begin to even out from the second to third round, where the average total value of the contracts in the latter round was $3 million. Just such a graph can be seen here at Business Insider. It’s difficult to do a one-to-one comparison to other sports for a number of reasons, but if you were to take a look at money spent on players the 2017 MLB Draft and the 2017 NBA Draft, you’d see a far less dramatic drop in salary.

It’s a very peculiar model with the NFL draft in that the high price of the first rounder can often times make them less desirable to have than second rounders. Don’t get me wrong, Peyton Manning was well worth the money he earned when he was taken in the first round, but (and SM means no offense here) was Robert Griffin III? Especially in a league where teams are limited in the amount of money they can spend every year, and where one bad play play can end a player’s season, it seems a very weird economic model to put such a premium on largely untested athletes. It seems just by glancing at the numbers that the second round carries more value. Researchers from Worcester Polytechnic Institute actually did the work in examining draft picks back in 2013 and came to this very conclusion that there is better value in the second round.

The ones who benefit from this type of economics tend to be agents of top prospects, the top prospects themselves. The owners ultimately benefit because it keeps their overall roster costs and risk to other draft picks lower. It would be a far fairer system to all draft picks to have a prescribed amount that can be spent for each overall position position in the draft (not by round), have the amount decrease elegantly with each successive pick to make the slope more even from first round to seventh. Of course such a thing would require thoughtful, well-meaning, and clear-thinking negotiations between the league and the union to achieve such a draft state, which means that such a measure has as much of a chance of coming to fruition there being an Israeli-Palestinian peace deal brokered by next Thursday. But that’s policy, and we’re just talking numbers for fun here. Anyway…

Good luck Jimmy! Let’s hope it’s all Golden Gates and sunshine and not Alcatraz and earthquakes!