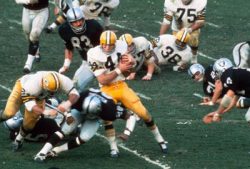 Super Bowl II, the second Super Bowl ever to be played, was a contest between the NFL champion Green Bay Packers and the AFL champion Oakland Raiders on January 14, 1968, at the Orange Bowl in Miami, FL. Technically game was not yet called the Super Bowl, it was known as the AFL-NFL World Championship Game, but the game has since been considered a “Super Bowl”.  The NFL champion, Packers beat the AFL champion Raiders 33-14.

For Green Bay and their coach Vince Lombardi, it was their third consecutive season as NFL champions, and their second AFL-NFL Championship (the first one being the previous year). Green Bay quarterback Bart Star was the game’s MVP. The game was also Lombardi’s last game as head coach of the Packers. He resigned two weeks later.

The game was broadcast on CBS. Sportscaster Ray Scott handled the play-by-play, with Pat Summerall and  Jack Kemp providing the the color commentary.