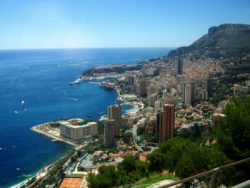 Monaco gets the award for the world’s second-smallest country. It occupies a tiny area of about 1.24 sq mi (2 sq km) on the Mediterranean Coast, bordering France on all its non-coastal sides.