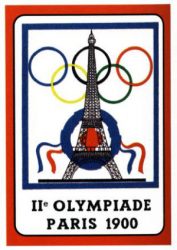 The second modern Olympiad was held in Paris, France, in 1900.