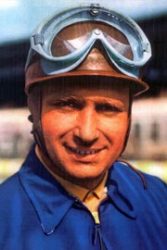 The first-ever World Formula 1 Champion was Nino Farina who won the title in 1950 while racing for Alfa Romeo.