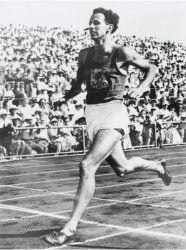 John Landy of Australia became the second person to run a mile in under 4 minutes on June 21, 1954, at an international track meet in Turku, Finland. His recorded time was 3 minutes 57.9 seconds, beating the mark Roger Bannister had set only a little over 7 weeks before on May 6, with a recorded time of 3 minutes and 59.4 seconds.

Landy later went on to have a distinguished political career in the Australian government.