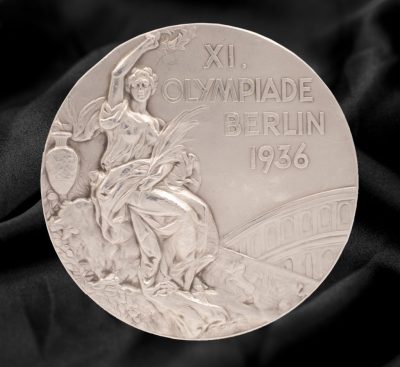 The silver medal won by German athlete Luz Long in the long jump at the 1936 Munich Olympics fetched $488,435 at auction on October 16, 2022, a record for an Olympic silver medal sold at public auction. In all, 20 bids were made for the medal, which had attracted a significant amount of worldwide media attention.

Many other pieces of Luz Long sports memorabilia were also sold at the auction. Among those items was an athlete ID card belonging to Long.

Luz Long is the ultimate silver medalist and would be on the Mt. Rushmore of SilverMedals.net if I had one. For those who haven’t read the the SilverMedals.net piece on Luz Long, Long was beaten by USA long-jumper and African-American Jesse Owens in the long jump competition at the 1936 Olympics in Germany. This wouldn’t have been such a huge deal in Olympic history had it not been the fact that the decidedly racist German chancellor Adolf Hitler was in attendance, and watched as Long was defeated by a black man. Hitler was likely further annoyed when Long and Owens embraced after the competition in what could be considered one of the most profound acts of sportsmanship in Olympic history.

Over the years since, stories surrounding the competition and its aftermath have been embellished in some ways and outright made up in others. Jesse Owens himself even admitted to embellishing the story of his later friendship with Long. But even when all possible embellishments are removed and only the known facts are taken into account, the competition between the two men was one for the ages and it was truly a great moment in sports history.

For more on Luz Long and his story, please have a look at the SilverMedals.net feature article: Carl Ludwig “Luz” Long — Won the Silver Medal in Long Jump at the 1936 Berlin Olympics.