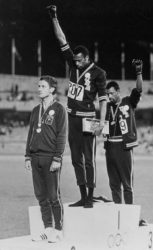 Peter Norman of Australia won the silver medal in the Men’s 200m at the 1968 Mexico City Olympics, in one of the more exciting finals in Olympic 200m history. However, it is not for his medal that he is known, rather he’s known as “the white guy on the podium” in the famous photo where Tommy Smith and John Carlos, both from the United States, raised their arms to protest the treatment of black Americans, giving the black power salute. 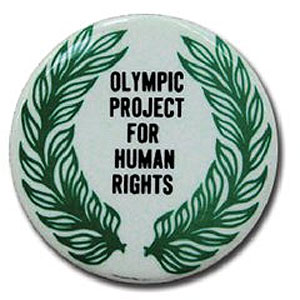 The Olympic Project for Human Rights badge that Carlos, Norman, and Smith wore on the awards podium.

Smith had won gold in the event, which was no surprise to people watching the previous heats, but for second place, the Australian Norman managed to edge out American John Carlos who was favored to challenge Smith for gold. Watching the video, Norman’s sudden burst of speed over the last 50m seemed almost super human. It was a great moment for Australian athletics.

Before the podium ceremony, Smith and Carlos told Norman about what they were to do. Norman, who himself was a proponent of human rights, told them that he supported their protest and firmly said he would stand with them. Additionally, Norman procured an “Olympic Project for Human Rights” badge from a member of the U.S. sprint team, and wore it — as did Smith and Carlos — while on the podium with the American athletes as a sign of solidarity and to express his support of human rights.

Both Smith and Carlos faced tremendous criticism for their actions when they returned to the U.S. Norman too had to endure his share when he returned to Australia. Over the years since, people came to realize the greatness of the moment and the contributions of the three athletes to the greater history of Civil Rights for all. When Norman died in 2006, Smith and Carlos both served as pall bearers at his funeral.

“Peter never flinched, he never turned his eye or his head…When I looked into his eyes, I saw nothing but love.” — John Carlos