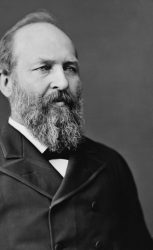 The second president to have been assassinated, Garfield was shot twice by Charles J. Guiteau, a delusional whack-job who imagined that he was owed a job in government by Garfield, at the Baltimore and Potomac Railway Station, in Washington, DC, on July 2, 1881. Garfield suffered 11 weeks before he finally succumbed to his wounds.

Abraham Lincoln was the first President of the United States to have been assassinated.