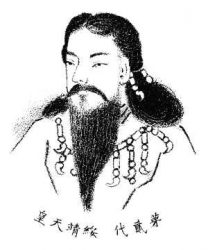 Emperor Suizei was the second emperor of Japan according to the traditional order of succession. He ruled from 581 to 549 BCE.