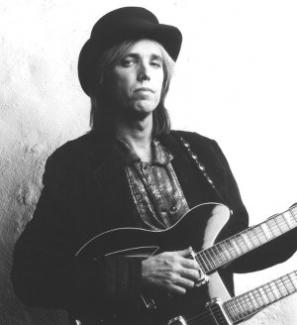 With the passing of the great American rock musician Tom Petty, SilverMedals.net would like to highlight his second-best-selling track, “Free Fallin”, which was included on the excellent album Full Moon Fever.

The album was Petty’s first solo album (without the Heartbreakers, although Heartbreakers guitarist Mike Campbell appeared frequently on the album) and included many great tracks in addition to “Free Fallin” such as “I Won’t Back Down”, “Runnin’ Down a Dream” (which had a very entertaining video to go along with the song), and a really great cover of the Byrd’s song “I’ll Feel a Whole Lot Better”.

Petty and his writing partner on the album, Jeff Lynne (ELO), wrote and recorded “Free Fallin” in just two days. Three chords (D, G, A along with some muted bar chords), a simple drum beat, an uncomplicated bass line, the song is another fine example of how great songs don’t need a lot of frosting to make them good. On the track, Petty played a 12-string guitar, which gave the main rhythm a nice full sound.

Second feats and events can come to me from anywhere here at SilverMedals.net, where I’ve taken the collection of “seconds” in history to new and obsessive levels. This one comes from an interesting book review in the The New Yorker by Adam Gopnik who wrote about composer Andrew Lloyd Weber’s new memoir, Unmasked. In the article, Gopnik expounds on the…read more

STAR WARS: LIGHT OF THE JEDI

In this installment of the High Republic series, a disaster in hyperspace may cause far greater damage.

A Hollywood recluse’s perspective changes when she invites her neighbors into her mansion after an earthquake.

THE BODY KEEPS THE SCORE

How trauma affects the body and mind, and innovative treatments for recovery.

STAR WARS: A TEST OF COURAGE

After their ship is sabotaged, a group of young survivors flee to a distant moon.

BRONCO AND FRIENDS: A PARTY TO REMEMBER

by Tim Tebow with AJ Gregory

Animals with different challenges and abilities attend a party.