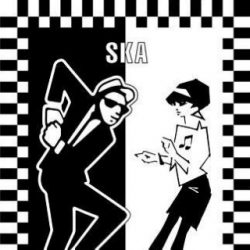 Ska is a musical genre developed in Jamaica in the 1950s that combines elements of U.S. jazz and blues and Jamaican mento music. It led to the later developments of the rock steady and reggae styles. The initial period in Jamaica when ska was  first developed is known as the “first wave”.

Ska had a revival in the late 1970s and early 1980s in the United Kingdom. This became known as second-wave ska. It was centered mostly in the city of Coventry where the influential record label 2 Tone Records was founded in 1979. Major bands from this era included The Specials, The Selector, The (English) Beat, The Bodysnatchers, and Madness. UB40 was another popular band from this era, but they were not on the 2 Tone label (and they were more reggae than ska).

The second-wave style added a hard electric guitar along with some synthesizer to the traditional Jamaican ska sound with its hip-moving beats and guitar upstrokes. Like Jamaican ska, the music was meant to be danced to (“skanking” is the name of the predominant dance style), but the rhythm in the second wave was much faster and a little more frenetic than first-wave ska.

The second wave petered out in the mid-1980s as many of the bands broke up or moved into other genres, although the music continued to be played fairly regularly on 80s playlists.

The third wave was a far more punk-aligned wave and came about primarily in the United States in the late 1980s.