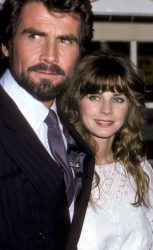 James Brolin married actor Jan Smithers in 1986. The second marriage for both actors, they had met in 1985 on the set of the television show Hotel. They had one daughter together before divorcing in 1995.

Smithers is best known for having played the role of Bailey Quarters, a smart, shy, “girl-next-door”-type character, on the hit television comedy WKRP in Cincinnati, which ran for four seasons from 1978 to 1982.

Brolin had previously been married to actor turned wildlife and conservation activist Jane Cameron Agee. They married in 1966 after knowing each other only 12 days. They divorced in 1984.

Brolin’s third marriage was to actress and singer Barbara Streisand. They married in 1998.