Quite possibly the greatest soccer player of all time, Brazilian-born Edson Arantes do Nascimento, better known as Pelé, signed with the New York Cosmos of the North American Soccer League (NASL) for what was then a record three-year $2.8 million contract. It was his second professional team.

Over the course of his Cosmos career, Pelé helped set numerous attendance and broadcast records. In his final season, 1977, Pelé helped lead the Cosmos to a league title.

Pelé had previously played for the Brazilian club team Santos from 1956 to 1974, before he retired from the Brazilian League. He had also helped Brazil to win three world cups in 1958, 1962, and 1970.

To further justify putting quotes around his “retirement”, Pelé’ who was very much past his prime playing days, but still well within his prime marketing days, signed with the New York Cosmos of the North American Soccer League (NASL). It was a huge signing for the league, which at the time was struggling to build a wider audience in the U.S.. Although a love of the game along with the prospect of playing in the U.S. was huge for Pelé, the money he earned in the signing was also a huge factor in his returning to the sport. With a three-year $2.8 million contract, Pelé at the time was the highest-paid athlete in the world. For the Cosmos, it was well worth the money. 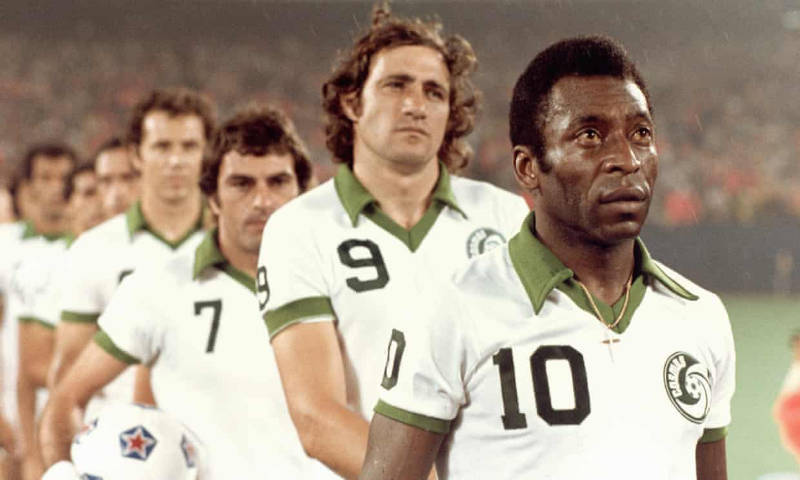 No. 10 Pelé in front with the New York Cosmos. Just behind him is Italian player Giorgio Chinaglia. (Robert Riger/Getty Images).