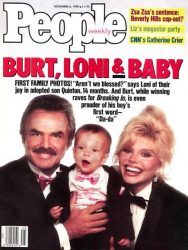 Burt Reynolds married actress Loni Anderson in 1988. A very public couple who were tabloid fodder throughout their relationship, the two actors ended up having a very public and acrimonious divorce in 1993.

For Loni Anderson, it was her third marriage.