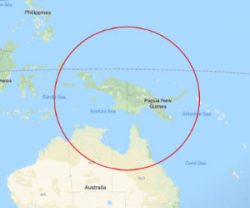 The island of New Guinea in the western Pacific Ocean is the world’s second-biggest island by land area. It occupies an area of  303,381 mi2 (785,753 km2). The western half of the island is broken up into two provinces that are part of Indonesia, while the eastern portion comprises the biggest part of Papua New Guinea.