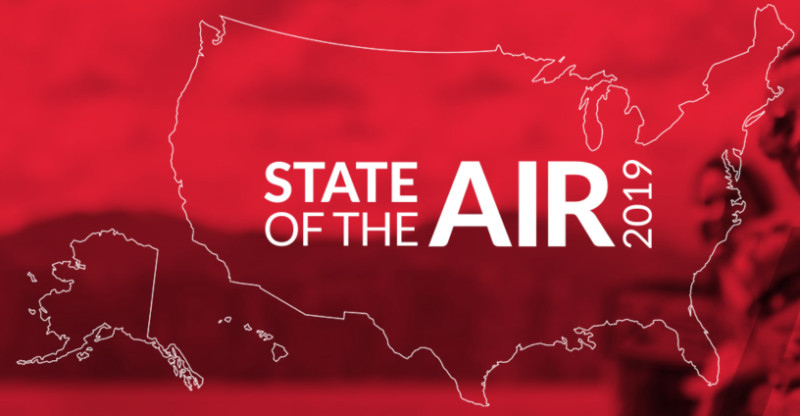 Several cities in the U.S. had a dark smoggy cloud come over them last week as the American Lung Association (ALA) released its annual State of the Air report. The sobering and slightly depressing report uses data on particulate matter — otherwise known as “soot” — and ground-level ozone — otherwise known as “smog” — that was collected between 2015 and 2017 to produce an air-quality grading system for metropolitan areas around the U.S.. A key finding in the report was that more than 141 million Americans, or 1 in 4 people, live in counties that got an F grade for air quality. Unfortunately that’s 7 million more people whose lungs are taking a daily beating where they live than in last year’s report.

The report is well-planned and well-sourced, and the ALA does a nice job citing their sources and explaining their methodologies. They also provide links to those sources, which many of these types of reports do not. Also, the online maps are quite helpful. Visitors can click around in different locations to see how crappy the air there is. My favorite part is where you can compare the air in your county to others. After several clicks and perusals, one thing I’ve learned from this report is that it sucks to live in California if you have lung issues.

Anyway, without further ado, the “second” findings. Out of 227 metropolitan areas in the U.S…

The second-smoggiest city, or rather the city with the second-highest number of days with high ground-level ozone was Visalia, CA. For those like me who didn’t know it, Visalia is in the San Joaquin Valley, about 40 mi. south of Fresno. It was edged out by the Los Angeles/Long Beach metropolitan area, which had the worst smog. Bakersfield, CA, was third-highest.

The second-sootiest city, the city with the second-most year-round particle pollution was Bakersfield, CA (see a pattern here?). It was second to the Fresno-Madera-Hanford, CA, metropolitan area. Third in this sooty category was Fairbanks, AK, of all places. Normally you think of Alaska as clean and pristine (excluding areas that have had historically bad oil spills and such). Funny thing about Fairbanks, though is that it ranks as the cleanest city in the U.S. in terms of smog. So you may get some soot on your windowsill if you live there, but you won’t be choked off by smog.

Lastly we have short-term particle pollution. This is like the annual particle pollution except it measures spikes in soot levels over a 24-hour period. You may wonder why this would  be a category worth noting if we already have an annual soot level category. Well, according to the ALA, even a few hours inhaling air with high levels of particle pollution can be bad for one’s health. So if you have a bunch of days where you’re inhaling the nasty stuff, it could possibly be worse than living in an area with an average amount of soot hanging over your town during the year. In this category, Fresno-Hanford-Madera ranks second. It was behind Bakersfield, which is beginning to sound like a tough place to live lung-wise. And third in this category is Fairbanks, AK.

What’s with the Air?

In many places on the west coast particulate matter levels, or PM, spiked due to wild fires. Organic matter burning and dry air can combine to really wreck your lungs. Other sources according to the report are wood-burning stoves, which is the deal with Fairbanks. Then for places like Pittsburgh, old diesel equipment and industry account for its poor air quality (it’s the only city east of the Mississippi in the top 25 for worse air quality).

Ozone levels are directly affected by atmospheric warming. The heat helps to stimulate the reactions that cause ozone to form at ground level, which means as the Earth warms, we can look forward to more lung-stressing smog.

This report serves as yet another reminder that climate change and the warming of the Earth are issues that are affecting people now, not 50 or 100 years from now, but now now. It also brings to light some of the real-life health issues people have with poor air quality, which are often overlooked whenever global warming and climate change are discussed. Especially for people who suffer from asthma or any other type of lung disorder, what may seem like another smoggy days to those of us who do not have lung issues, for them it can be life-threatening.

Ending on a Good Note, Cities with the Cleanest Air

For annual particle pollution, Cheyenne, WY, Kahului-Wailuku-Lahaina, HI, and Urban Honolulu, HI, were all tied for the cleanest in this category. Not sure which one is “second” here.

The other categories in the “cleanest” section do not rank the cities.