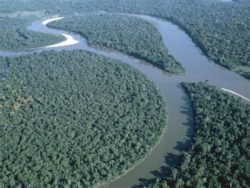 The Amazon River in South America is considered to be the world’s second-longest, however, in more recent years, some cartographers and hydrologists claim that it is indeed the longest. For the most part, determining a river’s length is a matter of definition than anything. The U.S. Geological Survey estimates the Nile to be the world’s longest at 4,132 mi, and the Amazon to be the second-longest at an estimated 4,000 mi. But even they admit that there are some arbitrary decisions made when determining a river’s length. What really doesn’t help matters much is that rivers change. Their courses can get shifted, their mouths lengthen or recede, they get dammed — in short, it’s really really hard to come up with a single all-encompassing definition for measurement.

SilverMedals.net, cannot make any determinations based on the evidence available. So therefore we say that the Amazon and the Nile are both the world’s longest and second-longest.