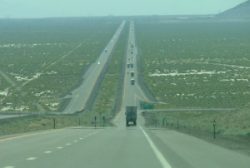 Interstate Highway 80, or I-80, is the second-longest interstate highway in the United States Interstate Highway System. It runs west to east for 2,899.59 mi (4,666.44 km) beginning in San Francisco, CA, and ending in Teaneck, NJ, where it meets I-95. One of the original of the Interstate Highways, I-80 follows closely the old Lincoln Highway, which in turn followed approximately the route of the first transcontinental railroad across the U.S.