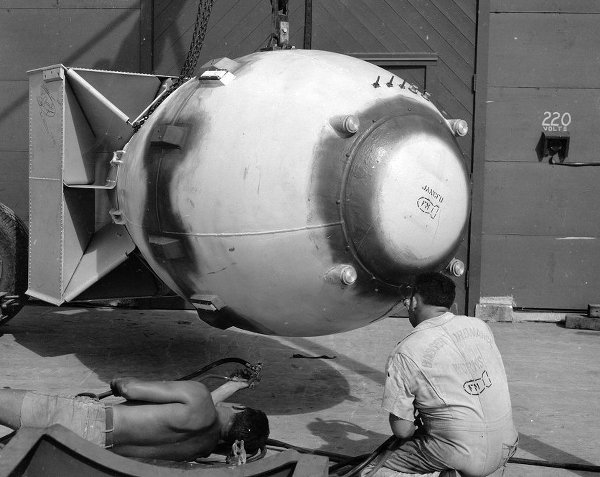 It was common during WWII for USAAF (United States Army Air Force) ground crews to write out little messages on bombs meant to be dropped on the enemy. It was a sort of middle finger to the soldiers whom they blamed for there being a war in the first place. There are even stories of bomber crew members throwing trash out the plane as an extra bit of nastiness and rancor to go along with usual payload of high-explosive and incendiary ordinance. Indeed writing names, messages, or other types of graffiti on bombs destined to blow up the enemy was certainly one small way a soldier could feel that he was personally delivering a little bit of hell to the enemy.

While gathering source material for the long-form article on this site titled “Nagasaki — Second City to Suffer a Nuclear Attack“, there appeared in this article in the New Yorker from August 2015 some interesting information about something stenciled onto the front of “Fat Man”, which was the codename of the second atomic bomb. 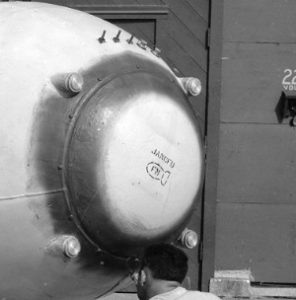 Here’s a closer view of the tip of the Fat Man bomb showing the “JANCFU” stencil.

Just to review, at the end of World War II, the United States dropped two atomic bombs on Japan. The first on August 6, 1945, over the city of Hiroshima, and the second over Nagasaki on August 9, 1945. We’re dealing specifically with the Nagasaki bomb here. It detonated 1,000 feet above the Japanese city, killing many tens of thousands of innocent civilians below.

Back to the stencil on Fat Boy — the stencil read “JANCFU”, and was written in that GI-WWII-army font, which looks pretty official. At first glance, it seems nothing more than one of those ridiculously long military acronyms that stands for something like “Joint Air Nuclear blah blah blah” or “Joint Air Naval something or another”, and isn’t even worth a second thought. Also considering what the bomb was and what it did, I mean really, who would actually give a crap as to what was stenciled across its tip?

Well SilverMedals gives a crap and apparently so does The New Yorker magazine. JANCFU was actually quite naughty.

JANCFU is a sardonic little acronym created by the very war-weary and cynical service members who comprised the spearhead of the American juggernaut that rumbled its way through WWII. It stands for “Joint Army Navy Civilian Fuck-Up”, which was a common sort of anti-military-life refrain used by the unfortunate GIs, who collectively spent 4 years dealing not only with the enemy but also with the plans and policies created by military planners who often displayed little in terms of common sense or strategic creativity.

Probably the most famous of these acronyms to come out of WWII is the term SNAFU, which in general parlance is another word for a mistake or a mix-up. Unbeknownst to many who use the term however, it stands for “Situation Normal, All Fucked Up”, which I love because I can remember my grade school teachers using the term liberally, possibly not knowing what it meant.

FUBAR was yet another well-used acronym by the soldiers of America’s greatest generation. It stands for “Fucked Up Beyond All Reason/Recognition”.

So the next time you find yourself thinking of atomic blasts over Nagasaki, remember that there were at least a few ground crewmen with a sense of irony and occasion. Such weapons and the failures of humanity which necessitated their use was indeed one big collective fuck up.