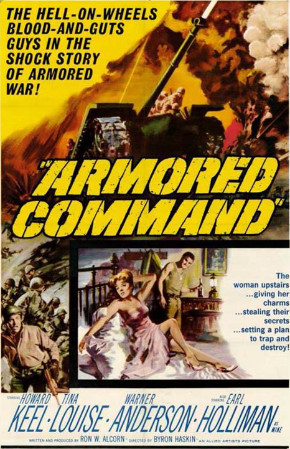 By the time Burt Reynolds signed up for the movie Armored Command (Allied Artists, 1961), his second full-length feature movie, he had already put together a respectable resumé as a stage and TV actor having appeared in at least 15 television shows in not only bit parts but in regular roles. An ex-athlete from Florida with a rugged sexiness that later came to define the 1970s manly man, Reynolds possessed many of the qualities that producers sought — looks, charm, and a Marlon Brando-esque presence. 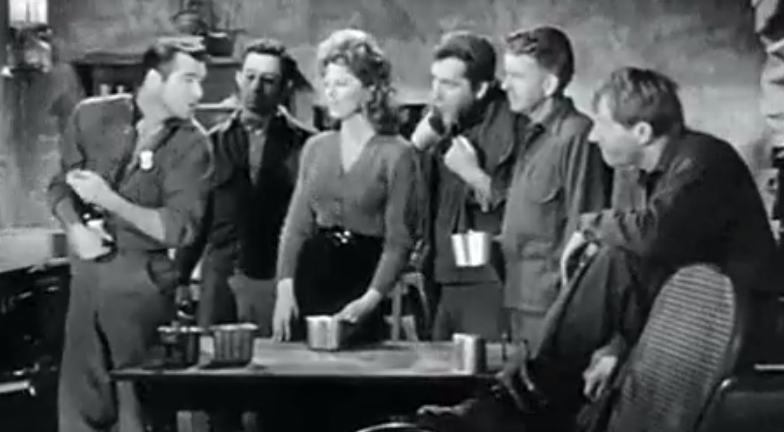 A still shot from Armored Command, Burt Reynolds is on the far left, Tina Louise is the woman third from the left.

There’s not nice way to say it, but Reynolds’ first movie was a piece of crap called Angel Baby, which came out in 1961 and was directed by George Hamilton. It took place in the rural south, which was a setting that fit the Florida native but overall, the movie didn’t fit much else.

That’s not to say that Armored Command is a particularly great movie, but it’s not entirely a bad one either. Better than Angel Baby, and certainly better than some of Reynolds’ other later movies such as Smokey and the Bandit Part 3, Operation C.I.A., or Skullduggery, it’s pretty entertaining, and today would’ve made for a watchable TV movie, or maybe even a Netflix-type joint. Although some of the acting with the minor characters is bland and the cinematic shots are little more than functional, the story and setting are interesting, and the main plot is somewhat entertaining.

The movie takes place during WWII on the southern front in France in a small town in the Vosges. The first scene opens on a wintery landscape on the edge of a forest where a woman played by Tina Louise (Ginger from Gilligan’s Island for all the boomers out there), is presented with two German soldiers — the three of them pretty obviously working together. After a few moments, the soldiers have the woman walk out onto a small rise and then they shoot her in the shoulder deliberately trying to not kill her but still causing her to collapse. The German soldiers then leave.

Some time later, an American half-track vehicle with a small group of U.S. soldiers shows up only to find the collapsed woman. Among these soldiers is “Skee” played by Burt Reynolds, and together they bring her back with them to their billet in town.

A parallel plot to the story is the plight of the unit as a hole. At the time of the story, the Battle of the Bulge was taking place farther to the north, and it was believed by the top Allied commanders that the area around the Vosges town was “quiet” and that there was only a skeleton force of Germans in front of them. The American colonel in charge of the town, Colonel Devlin played by top-billed actor Howard Keel, was unconvinced that the nearby German army was as small as everyone else believed, much to the annoyance of the men under him and his commanders. Throughout the movie, he sought to convince anyone who would listen that their situation was precarious.

Much of the story revolves around the small group of soldiers with the French woman, whose name is Alexandra Bastegar. The character Mike, played by Earl Holliman, is in charge of the group, and he becomes smitten with Bastegar and made it his task to nurse Bastagar back to health, and to be her protector. The other soldiers in the group were taken in by the French woman’s allure.

Meanwhile, Bastegar would sneak away to visit a baker in town who was also a German spy so that she could pass on information she learned from the unit. Over time it becomes apparent to Develin, who was busy trying to assess their overall situation, that there was a spy in the village. It didn’t take him an his immediate subordinates long to suspect Bastegar.

During a patrol that was particularly deadly, Skee sprained his ankle badly but was helped back into town. The next night when the rest of his group went out on another patrol, Skee had to remain at the billet because his ankle hadn’t yet healed and he was unable to run or walk without a limp. While his group was gone, Skee went up to Bastegar’s bedroom in the billet and raped Bastegar. When the group returned, they realized that Skee had raped Bastegar, and a fight broke out between Mike and Skee, which was broken up by the other men.

Times goes on, tension builds, Devlin cannot convince anyone of how much danger they are in, finally the Germans attack. Because Devlin had ordered everyone to be on alert, the Americans were ready for the German attack. As for Mike, Skee, and the rest of the unit, they realize that Bastegar is a spy, especially after she guns down Skee killing him. The rest of the guys in turn kill her. Battle ends. Lessons were learned. War is terrible. Roll credits. Ninety-nine minutes of your life you won’t get back.

Reynolds for the most part was channeling his inner Marlon Brando in Armored Command.

The real fun of the movie today comes not from the movie itself per se, but in seeing a young Burt Reynolds doing what was essentially a Marlon Brando impression. That’s not an exaggeration. Reynolds played the part of Skee, a young, self-confident, animalistic U.S. infantryman who is the tough bad boy of his unit.  When you watch the movie and see how Reynolds conducts himself and speaks, it’s very Brando-ish. That’s not a knock on Reynolds, many other actors of the time playing similar roles would do a knock-off Brando who was the archetype for the postwar/pre-70s brooding, seething, male character; however, Reynolds himself very much disliked such comparisons. Even through the Brando-ness exhibited in his performance, Reynolds showed that he could very well command a scene and have a palpable presence even when he wasn’t the focus of the action.

Reynolds wasn’t the only actor in the film to go on to more noteworthy or interesting projects. Actor Marty Ingels, who had previously made numerous appearances in movies and TV, later went on in is personal life to marry Partridge Family actor Shirley Jones (the two having met at a party at the future Little House on the Prairie actor Michael Landon’s house); and Tina Louise went on to bigger fame playing Ginger Rogers on Gilligan’s Island.