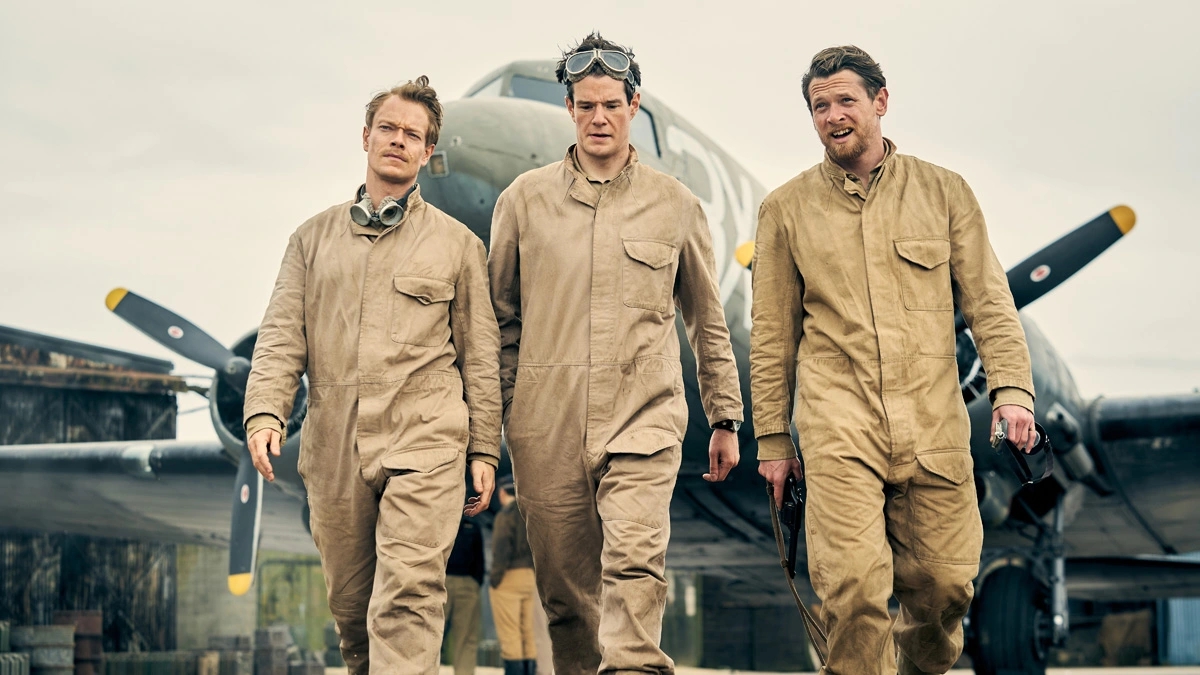 With such great raw material to work from, you’d think it’d be easy to make a great series from it. Apparently it wasn’t.

The BBC1 series Rogue Heroes based on the Robert MacIntyre book of the same name is an altogether silly comic-book effort to tell the incredible story of the formation of the elite British Special Air Service during World War II. Produced and written by Stephen Knight whose credits include the popular series Peaky Blinders, his style and execution which worked well in his previous endeavors is poorly deployed in this recent effort. Indeed the producers’ attempt at creating an atmosphere indicative of the time and situation is cursory and shallow, and the dialog feels like it was written by a poorly coded AI.

The British Special Air Service was formed in the North African desert in 1941. It was the brainchild of David Stirling and John Steele “Jock” Lewes, whose combined goal in forming the unit was to perform strategic raids on Italian and German supply lines in North Africa. Blair “Paddy” Mayne was brought into the fold by David Stirling during a conversation between the two men in a Cairo jail cell where Mayne was being held after having assaulted a British officer. After having selected and trained soldiers from the army’s elite commando units, the newly formed SAS went on to terrorize the Axis army in North Africa and Europe for the remainder of the war. Instead of a faithful dramatization of the brilliant stories that expand on the SAS founding as told in the book Rogue Heroes, audiences are presented with an unholy amalgamation of Peaky Blinders, Inglorious Basterds, The Dirty Dozen, and Tank Girl.

How Fictional Should It Be?

Rogue Heroes suffers in that it doesn’t really know what it wants to be. At times it is funny and irreverent such as a scene where a hung over David Stirling visits his laughing-gas addicted doctor, which despite the rest of the first episode, was actually entertaining. Then at other times, it’s a cacophony of violence indicative of the time and place such as during several interlocked scenes showing the men fighting.

Rogue Heroes begins with David Stirling driving in a convoy across the North African desert bound for Tobruk, Egypt, where the British garrison is being bombarded day and night by Italian artillery and aircraft. With jaunty military music as the score, the masked figure of David Stirling sitting in the driver’s seat notices his truck’s fuel level is low. So he signals to the rest of the column to halt. Exiting his own vehicle, Stirling walks over to the vehicle of the officer in charge of the convoy and asks him to order the fuel trucks to fill up all the convoy trucks so they can continue their journey. The obviously inept commanding officer then informs Stirling that the convoy only brought enough fuel for 500 kilometers and not the actual 500 miles they were supposed to cover, thus stranding the long line of trucks in the Egyptian desert.

In a nutshell, this scene is supposed to laughingly show us the problems of ineptitude which plagued the British army as seen by Stirling. What’s missing here is the gravity of the convoy not making it to Tobruk, which is lost to the audience during this darkly comical scene. Things get interesting in the next scene where Stirling is sitting in a bar getting drunk when he’s approached by two Australian soldiers who want to fight. Of course, in real life it’s highly unlikely two enlisted men would try to fight an officer in any army, but it’s a small bit of license we can allow. In an effort to intimidate the Australians into not fighting him (which Stirling was successful in doing), he delivers a long-winded overly dramatic speech about his being a commando and being trained to kill. All the while we cut to scenes of Mayne beating the living crap out of three military police in a jail cell and Lewes leading a raid on an Italian artillery battery. Overall it’s an eye-rolling introduction to our three main characters that felt forced and rushed, as if the producers were hitting the audience over the head while yelling “LISTEN TO THIS AND YOU’LL COMPLETELY UNDERSTAND THESE CHARACTERS! PLEASE CARE ABOUT THEM!”

Like a concerning number of recent TV series, character development in Rogue Heroes is almost non-existent. Rather the story skips between the three main characters giving us only superficial insight into their selves. Where the story does try to get below the surface of Stirling, Mayne, and Lewes, it often misses with puzzling results to those of us who actually read the book. And that may be what separates those who like this series from those who don’t. If you’re expecting anything near to the book Rogue Heroes and the people it depicts, you’ll be sorely disappointed. And that’s a shame because the real-life people were far more interesting than the empty uniforms portrayed in the series.

As for the main cast, Connor Swindells as David Stirling and Jack O’Connell as Paddy Mayne were cast very well. Both are very fine actors who physically embody the real-life duo well. But as for being anything like the real-life Stirling and Mayne, they flat out don’t get it and for that we have to fault the direction they were given. Then there’s Alfie Allen as Jock Lewes who is a hard miss on all fronts, and quite possibly the most disappointing depiction of the man who had incredible looks, intelligence, and savvy. Instead we get another caricature who unlike those around him never ducks for cover whenever a dive bomber swoops by — a tired and often-used way to show that a soldier character either doesn’t care or is aloof, either way it is annoying in this case. In all Allen’s character’s attributes did not in any way match the character’s actions, actions that were based on the personality of the real Jock Lewes. Not present was the almost mad-scientist aspect of Lewes’ personality or any of his rough-and-tumble youth in Australia. Instead Lewes is presented as a stiff and removed bullshit-weary officer, possibly on some sort of behavioral spectrum, which was actually more like the real-life David Stirling than the real-life Lewes.

The most aggravating aspect of Rogue Heroes is the obvious script doctoring that went into the final product. Some of these feel forced, such as the time around the 47th minute of the first episode, we find an American pilot shoehorned into the scene in a manner that can only be viewed as a blatant attempt to get an American in there (likely to give American audiences something to hang onto). Then there is the clumsy insertion of Eve Mansour, a sexyFrench intelligence officer (played as well as could be expected by skilled actor Sophia Boutella) who is so artlessly dropped into the story. She simply walks in and announces that she’s with French Intelligence. Seriously, couldn’t they have found a better way to inject her into the story than to have her suddenly show up in a crowded club where Mayne was sitting, park her butt across from him and straight up tell him that she is a French intelligence officer within 30 seconds of meeting him? In a crowded club?!? Aren’t people in intelligence supposed to be a bit more tight-lipped than that? There is only so much disbelief suspension one can handle, especially with predictable anachronistic rock music playing in-between scenes. But to have an intelligence agent simply announce that she’s an intelligence agent in the middle of a war zone without even an attempt at secrecy is just plain head-slappingly stupid and indicative of the wider issue with the series in that the writing is absolute shit.

In the end, the most inexcusable flaw in Rogue Heroes is that it fails to capture the ethos of the SAS, which is the very thing that made and continues to make them unique. Instead we are left with a story that looks very much like other poorly executed period narratives which is a missed opportunity and a shame. Perhaps it would have been best if the series was not named after the book but rather something else so that those of us who read the book wouldn’t go in with any expectation.

Rogue Heroes is not an altogether terrible watch. People who aren’t hung up over the bad history (like I am), the ridiculously stupid Tarantino-esque cinematic touches, or asinine thematic clichés throughout will probably like it. As far as most contemporary pseudo-period pieces go, it’s an okay adventure story with some terrific talent in front of the lens and a team of clueless drones behind it. But do yourself a favor and read the book — the stories there are much much much better.

For more information on the founding of the SAS, have a look here.